This study surveyed a nationally-representative sample of 5,700 middle and high school students between the ages of 12 and 17 in the United States. Data were collected between July and October of 2016. Click on the thumbnail images to enlarge. 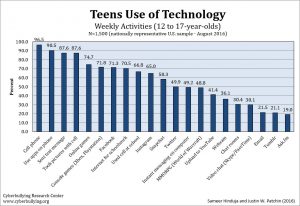 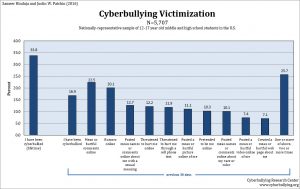 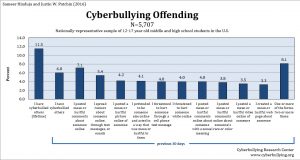 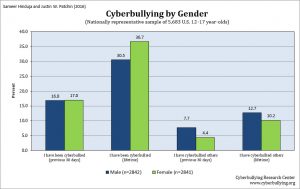 Teen Technology Use. Cell phones and other mobile devices continue to be the most popular technology utilized by adolescents with the top four reported weekly activities involving their use. Facebook remains the most frequently cited social media platform used on a weekly basis, but Instagram and Snapchat are increasing in popularity. Chat rooms, Tumblr, and Ask.fm remain largely unpopular among this age group.

Cyberbullying Victimization. We define cyberbullying as: “Cyberbullying is when someone repeatedly and intentionally harasses, mistreats, or makes fun of another person online or while using cell phones or other electronic devices.” Approximately 34% of the students in our sample report experiencing cyberbullying in their lifetimes. When asked about specific types of cyberbullying experienced in the previous 30 days, mean or hurtful comments (22.5%) and rumors spread (20.1%) online continue to be among the most commonly-cited. Twenty-six percent of the sample reported being cyberbullied in one or more of the eleven specific types reported, two or more times over the course of the previous 30 days.

Our 2016 survey involved a large enough sample of American middle and high school students that it allows us to extrapolate rates of victimization for various demographic subgroups. For this particular chart, we examined cyberbullying victimization within the last 30 days for three characteristics: race, sex, and age. Read more here: https://cyberbullying.org/cyberbullying-victimization-rates-2016

For this study, we contracted with three different online survey research firms to distribute our questionnaire to a nationally-representative sample of middle and high school students. We had four different versions of our survey instrument which allowed us to ask a variety of questions to subsamples of each group. All students were asked questions about experiences with bullying and cyberbullying, digital dating abuse or violence, digital self-harm, sexting, and sextortion. Overall we obtained a 13% response rate, which isn’t amazing, but is higher than most generic Internet surveys.

With any imperfect social science study, caution should be used when interpreting the results. We can be reassured somewhat in the validity in the data, however, because the prevalence rates are in line with results from our previous school-based surveys. Moreover, the large sample size helps to diminish the potential negative effects of outliers. Finally, steps were taken to ensure valid responses within the survey instrument. For example, we asked the respondents to select a specific color among a list of choices and required them to report their age at two different points in the survey, in an effort to guard against computerized responses and thoughtless clicking through the survey.

We want to thank the Digital Trust Foundation for funding this study.

February 1, 2022 – The Role of Parents in Preventing Bullying and Cyberbullying

September 16, 2020 – Bullying and Cyberbullying: The Connection to Delinquency

November 19, 2019 – Sextortion: More Insight Into the Experiences of Youth

July 17, 2019 – Youth Sexting in the US: New Paper in Archives of Sexual Behavior

May 15, 2018 – Student Experiences with Reporting Cyberbullying

October 3, 2017 – Digital Self-Harm: The Hidden Side of Adolescent Online Aggression

June 2, 2017 – More on the Link between Bullying and Suicide

January 3, 2017 – Millions of Students Skip School Each Year Because of Bullying