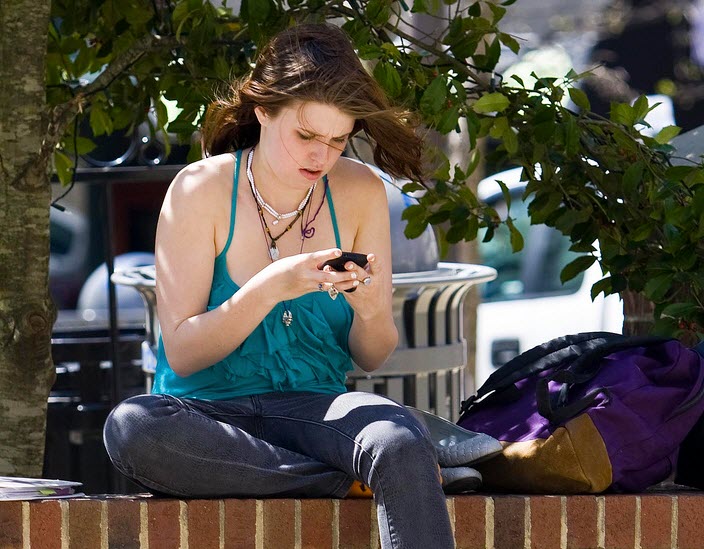 A recent New York Times headline caught my attention: “Teenagers, Stop Asking for Nude Photos.” Sage advice, I must admit, but I wondered where this was coming from. In the article, Psychologist Lisa Damour argues that we have long been warning children about the dangers (reputational and potential legal consequences) of sending sexually explicit images, but have largely failed to impress upon them the inappropriateness of asking for such images. “Most schools and many parents already tell teenagers not to send sexualized selfies,” she writes. “But why don’t we also tell adolescents to stop asking for nude photos from one another?”

Coincidentally, not long ago I was asked by a parent if it was illegal to request nude photos from a minor. He was very upset that his teenaged daughter was asked by a classmate to send a naked picture and wanted to know if the kid could be punished. I told him that I was unaware of a specific law that addressed the behavior but that depending on how a prosecutor viewed the situation it could fall under certain statutes such as “contributing to the delinquency of a minor” or “soliciting a minor.” I have heard that some states (and other countries) are considering criminalizing the act of asking for a nude photo(1). Whether that’s wise could be the subject of a future post. But more generally, is this really a widespread problem that warrants such a heavy-handed response?

Citing a paper recently published in the journal Sexuality Research and Social Policy, Dr. Damour reports that “over two-thirds [of 12 to 18-year-old girls] had been asked for explicit images.” This number seemed *really* high to me. So, taking the advice I often give to my undergraduate students, I turned to the primary source for clarification.

The article upon which this claim is based was written by Sara Thomas, a doctoral student in human development and social policy at Northwestern University. Thomas reviewed anonymous online stories posted to the website athinline.org (a project of MTV). Teens were invited to “share stories pertaining to digital drama.” Over 7,300 comments were posted between March of 2010 and January of 2016. Thomas focused on the 462 (about 6%) that were written by girls (self-disclosed) and included some mention of sexting. Among this group, yes, about two-thirds had noted that they’d been asked to send nude photographs. But this is hardly a representative sample of girls, or their experiences. So I pondered what the rate of requesting was in the general teen population (not just those who had visited athinline.org, had an experience with “digital drama,” and were willing to share it online).

“We should stress the fact that more than 80% of teenagers have not been asked to send a nude photo, and more than 90% have not asked others, which emphasizes the abnormality of the act.”

It turns out that most teens aren’t asking for nudes. Regular readers know that we collected data a little over a year ago from a national sample of 5,700 12-17 year-old students. I previously wrote about the general rates of sexting found in this study. In short, about 19% said they had received a nude or nearly nude image from someone they knew while about 12% admitted to sending such an image to someone else. These rates are much lower than commonly reported in the media, but are consistent with other statistics published in refereed academic sources.

But until revisiting our dataset the other day for another paper Sameer and I are working on, I had forgotten that we also asked respondents to tell us if they’d been asked to share images (or if they’d asked others). Overall, 17.5% of students said they had been asked to send an explicit image. More specifically, about 13.4% said they were asked by a current boyfriend or girlfriend and 13.1% were asked by someone who wasn’t a current significant other (9% were asked by both). Only about 9% said they had asked others to send them naked images (7.9% had asked a significant other and 5.6% had asked someone else). When I broke the numbers down by sex, it is true that boys were significantly more likely to ask for a sext (11.3% compared to 7.1%). But boys and girls were equally as likely to report that they had been asked for one (16.7% compared to 18.3%). These numbers are nowhere close to the two-thirds reported in the sample from the MTV website.

While the headline of the New York Times article is misleading and the cited statistic is taken out of context, I do agree with Dr. Damour that we could do a better job of emphasizing the problems with asking for explicit images (instead of only telling youth not to send them). She’s undoubtedly correct that fewer sexts would be sent if fewer requests were made. It’s also true, as Ms. Thomas points out, that many young girls feel pressured into sending images when repeated requests are made. Addressing the problem of adolescent sexting from the point of view of the potential sender and receiver certainly does make sense.

But it’s also important not to overinflate the problem by publishing misleading statistics. Dr. Damour correctly suggests that norms can influence adolescent behaviors. If a boy hears that two-thirds of girls have been asked for a naked picture, he may think it is okay to make the request (“Everyone is doing it!!!”). Likewise, the girl who receives such a request might think it is normal and therefore acquiesce even though her gut might be telling her otherwise. Instead, we should stress the fact that more than 80% of teenagers have not been asked to send a nude photo, and more than 90% have not asked others, which emphasizes the abnormality of the act.

By and large kids just want to fit in. If you tell teens that most others are asking for nudes, they’re going to ask as well. Parents and educators, the takeaway is clear: remind the youth in your life that most teens are not asking for nude photos (or sending them). That is the norm, and one we should continue to encourage.