Are “Gamers” More Likely to be “Bullies”?

Conventional wisdom and media headlines would have one believe that those who play video games are more at risk for engaging in a host of anti-social behaviors. There is certainly nothing new about this mentality: It was prominent in my 80s-era adolescence as well. I remember spending many hours playing Mortal Kombat on the classic Nintendo and, looking back, wonder if my parents worried about the toll it would take on my temperament.

While the games have become more realistic and engaging (addicting?), the nature of the relationship between gameplay and aggression is still hotly debated. On one hand, the American Psychological Association released a statement in 2015 warning of the effects of violent video games. Multiple meta-analyses (Anderson et al., 2010; Sherry, 2001) do suggest a pretty clear connection between violent video games and aggressive behaviors. But critics have questioned methodological decisions and statistical interpretations or pointed out that any effects observed have been relatively small (Ferguson, 2007; Ferguson & Kilburn, 2010; Hilgard et al., 2017). And while there’s been some research showing that those who play violent video games are more likely to engage in bullying (Hamer et al., 2014), other analyses find no such effect (Ferguson et al., 2017). So where does all of this leave us?

What Our Data Show About Gaming and Bullying

To learn more, we included some questions about gaming in a subsample of about 1,500 respondents to our 2016 survey of 12-17-year-olds. Here’s what we found:

Overall, students who self-identified as “gamers” were significantly more likely to have said that they bullied or cyberbullied others during the previous 30 days. Specifically, 21% of gamers and 11% of non-gamers had bullied others at school, while 11% of gamers and 6% of non-gamers said they had cyberbullied others. Interestingly, gamers were also more likely than non-gamers to be the victim of bullying at school (40.7% compared to 27.2%) and bullying online (25.9% compared to 15.7%). So on its face, there seems to be a connection between gaming and bullying.

One such variable might be the type of game. Respondents who favored multiplayer online battle games as well as first- and third-person shooter games were significantly more likely to report participation in cyberbullying than those who preferred other types of games (17% compared to 7%, see Chart 1). There could be something about the game itself, or the kind of kid who likes those types of games, that explains the increased risk of offending. 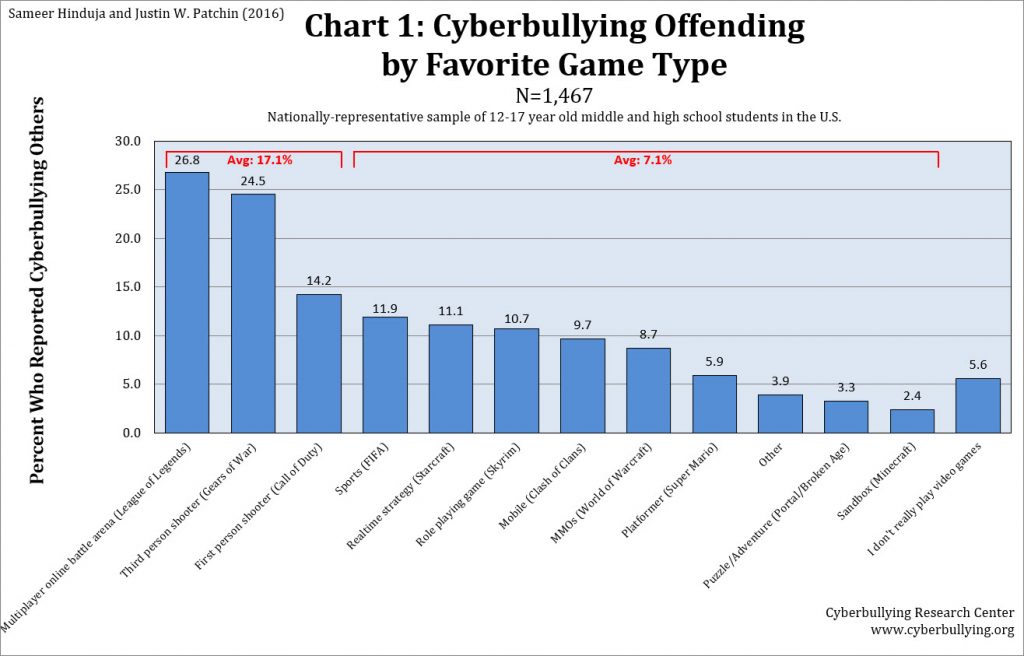 Another consideration might be the number of hours per week played. Indeed, when number of hours per week played was added to the multivariate regression model, the effect of being a gamer completely disappeared. That is, whether a student was a gamer or not didn’t matter when hours of play was considered. As shown in Chart 2, students who reported playing fewer than two hours per day were significantly less likely than those who played more to have cyberbullied others (15% compared to 7%).

Interestingly, hours of play was also important when it came to the types of games more associated with bullying others (multiplayer battle and first/third person shooter). About 13% of students who favored these types of games who said they played fewer than 2 hours per day said they had cyberbullied others, compared to more than 20% of those who played more hours per day. So limiting the amount of time played, even when the type of game is more violent, could be a potential way to reduce negative outcomes. 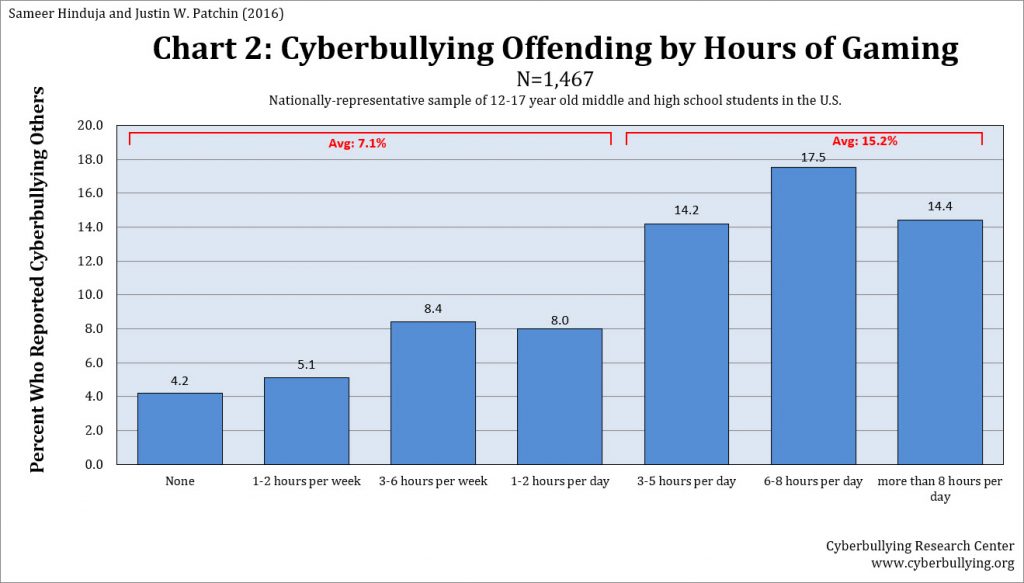 I should point out that we did not set out to settle the longstanding debate about video games and violence when we embarked on our 2016 study and therefore our data lack important controls to contribute meaningfully to this discussion (other relevant variables, more comprehensive measures, etc.). We are interested in exploring the relationship between bullying and gaming, and therefore included a couple of basic measures to see what we could learn in this go-around.

It’s also important to point out that we collected these data before the explosion in popularity of Fortnite and Player Unknown: Battlegrounds (PUBG), the two biggest games right now. Fortnite and PUBG could be categorized as multiplayer online battle games (similar to League of Legends, although not team-based), but we don’t know how these newer games (or any specific game for that matter) is related to violence or aggression.

In short, there is more work to be done. My review leads me to believe that there is a connection between gaming and deviance (and bullying behaviors specifically), but that influence is likely relatively small and mediated by many other factors (family, school, personal traits–variables not included in our data). And we still really don’t know whether playing violent video games makes someone more violent or if aggressive youth are just drawn to these types of games. In addition, we can’t forget about the possible positive effects gaming can have. Indeed, recent research has extolled the social, cognitive, and emotional benefits of playing certain games (Granic et al., 2014; Markey et al., 2015). Indeed, a 2014 meta-analysis concluded: “Whereas violent video games increase aggression and aggression-related variables and decrease prosocial outcomes, prosocial video games have the opposite effects.” (Greitemeyer & Mugge, 2014, p. 578).

The immediate take away from my exploratory analysis is: take a look at what kind of game your child is playing, and make sure they aren’t playing it so much that it interferes with other family and school responsibilities. Better yet, get in there and play with them. That way you can address any problems that might come up in the game. You can also have meaningful conversations with your child over the course of hours of gameplay.

By the way, harkening back to my “gamer” days, I do vividly remember skipping school one day to finish the original Legend of Zelda game. So even though gaming did lead to a bit of deviance for me, it didn’t derail my future like some might have predicted. And yesterday I stumbled across a new puzzle game on my phone that occupied more time than I feel comfortable admitting. So I guess we never really shake our gamer tendencies. I’ve intentionally avoided playing the newer generation of multiplayer online games precisely because I know I could easily get wrapped up in them. I am happy to admit, however, that I still occasionally play Mario Kart with my eight-year-old. And we both have a good time.

Final note: The title of this post is intentionally provocative. I generally try to avoid labeling people, especially youth. Referring to someone as a “bully”—or even a “gamer”—can have unintended negative consequences. I’m not even sure what makes someone a “gamer.” In our survey we asked students to tell us if they would consider themselves a gamer, for this very reason. If they identify as a gamer, they must be.