This study surveyed a random sample of 4441 youth between the ages of 10 and 18 from a large school district in the southern United States. Data were collected in February of 2010 from 37 different schools. Click on thumbnail images to enlarge. 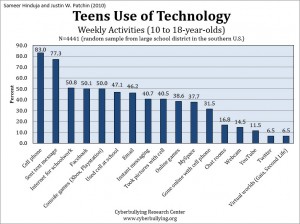 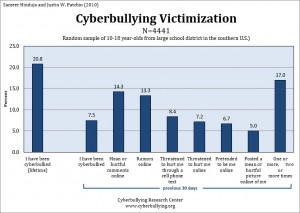 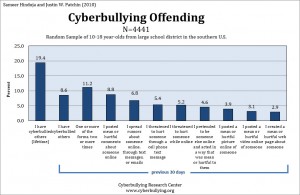 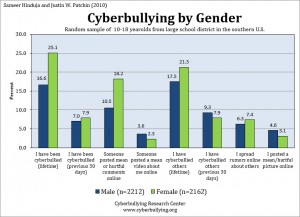 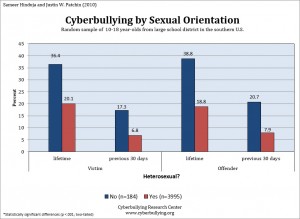 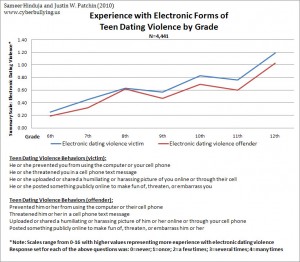 Teen Technology Use. Cell phones continue to be the most popular technology utilized by adolescents with almost 83% of youth in our sample report having used one at least weekly. A greater proportion of adolescents are now using Facebook compared to MySpace, and twitter remains unpopular among most youth.

Cyberbullying Victimization. We define cyberbullying as: “Cyberbullying is when someone repeatedly harasses, mistreats, or makes fun of another person online or while using cell phones or other electronic devices.” Approximately 20% of the students in our sample report experiencing cyberbullying in their lifetimes. When asked about specific types of cyberbullying in the previous 30 days, mean or hurtful comments (13.7%) and rumors spread (12.9%) online continue to be among the most commonly-cited. Seventeen percent of the sample reported being cyberbullied in one or more of the nine types reported, two or more times over the course of the previous 30 days.

Electronic Teen Dating Violence. There are many ways in which teens can exploit Internet-enabled devices to cause harm to a romantic partner. Our research has asked about four specific behaviors (see graph) and we find that as youth get older they have more experiences with electronic forms of dating violence. For more information about cyberbullying as a form of teen dating violence, see our Fact Sheet.