We’ve all heard the “sticks and stones” adage while growing up, and the reality is that words – whether expressed online or in person – can hurt.  Sometimes very deeply.  But do they always?  And do they have to?  That is, do I have any say in the matter or am I completely at the mercy of you, others, and any external force that seeks to bring me down?

I’d hope we can agree that words said to my face or typed on Instagram under my latest post don’t hold some sort of omnipotent power to always harm me.  Instead, their effect ranges on a continuum depending on the target and their constitution. For some, they devastate. For others, they mean nothing. For still others, the effect lies somewhere in between.  This begs the question: is there a major personal characteristic or trait that buffers and protects against the internalization of harm intended through bullying and cyberbullying? And if so, can it be nurtured and developed?

The answer is a resounding “yes.”  It’s resilience.

I’ve been thinking about the concept of resilience in the lives of youth a lot over the last two years, and have immersed myself in the work of scholars and practitioners who have championed it. I’ve always intuitively thought it mattered, but I needed to study it in greater detail before I could fully get on board.  And, I revealed my findings in my recent keynote at the International Bullying Prevention Association’s annual conference this year – the premier gathering of the top scholars and practitioners in this field.

Based on sound theory focused on the need to develop “whole” children with the social competencies they critically need for personal and professional success, resilience advocates argue that we can teach kids how to “bounce back” or “overcome adversity” when they face it while growing up (Benard, 2002; Masten, 2009).  And we know they will – in their schooling, in the workforce, in their health, and in their social and relational lives. More specifically, resilience is “the capacity to spring back, rebound, successfully adapt in the face of adversity, and develop social and academic competence despite exposure to severe stress…or simply the stress of today’s world” (Henderson & Milstein, 2003:7)

Bullying prevention professionals – myself and Justin included – rightfully spend a great deal of time restructuring the environment around a student to promote safety by:

All of that matters, because bullying and cyberbullying are complex problems.  Collectively, these efforts can bear fruit.   However, an often-neglected and even forgotten component of the ways that schools, families, and communities respond has to do with the target’s role and responsibility.  And, the fact that they actually do have a significant measure of agency to allow or disallow much of the harm to take place.

We want students to learn and develop the skills they need to deal with problems, and yet we rarely help them engage with those problems so that they can grow in their ability to solve them.  Instead, we seek to constantly protect and insulate them – instead of bolstering their self-confidence, problem-solving ability, autonomy, and sense of purpose – which are all innate strengths (Benard, 1991, 1997).  But that type of response – while well-meaning –  ill-prepares them for a future where they will undoubtedly face social conflict and strife in adulthood.  Arguably, we are doing them a severe disservice by never training them for the reality that there always will be haters and jerks looking to tear them down – especially if they succeed (which, of course, we want for them and they want for themselves).

Think of all of those who have “made it” in the world’s proverbial eye – (President Obama, Taylor Swift, Jennifer Lawrence, among others) they constantly deal with trolls, bullies, and aggressors.  We greatly respect those who have the social abilities and assets to deflect, dismiss, or otherwise rise above the insults and hate.  We want to do the same in our lives.  And we definitely would want our youth to handle such situations in the same healthy and constructive way.  For lack of a better phrase, we want – and need – them to be overcomers.  But this must be taught, facilitated, modeled, and encouraged.

Our Research on Resilience

In a future blog, I will discuss research-based ways to increase resilience among our youth.  For now, it’s very important to set the stage by sharing how data back up this call to action.   A few months ago we collected data from a nationally-representative sample of 5,700 middle and high school students. For a subsample of 1,200 of these students, we asked questions about their resilience. We wanted to see how resilience was related to experiences with bullying and cyberbullying. We used the shortened and validated Connor-Davidson 10-item resilience scale (Campbell‐Sills & Stein, 2007) that included the following statements which included the response set of Not True at All, Rarely True, Sometimes True, Often True, and True Nearly All the Time:

We created a mean (average) scale for the resilience measures, and compared respondent scores on resilience to various experiences related to bullying. 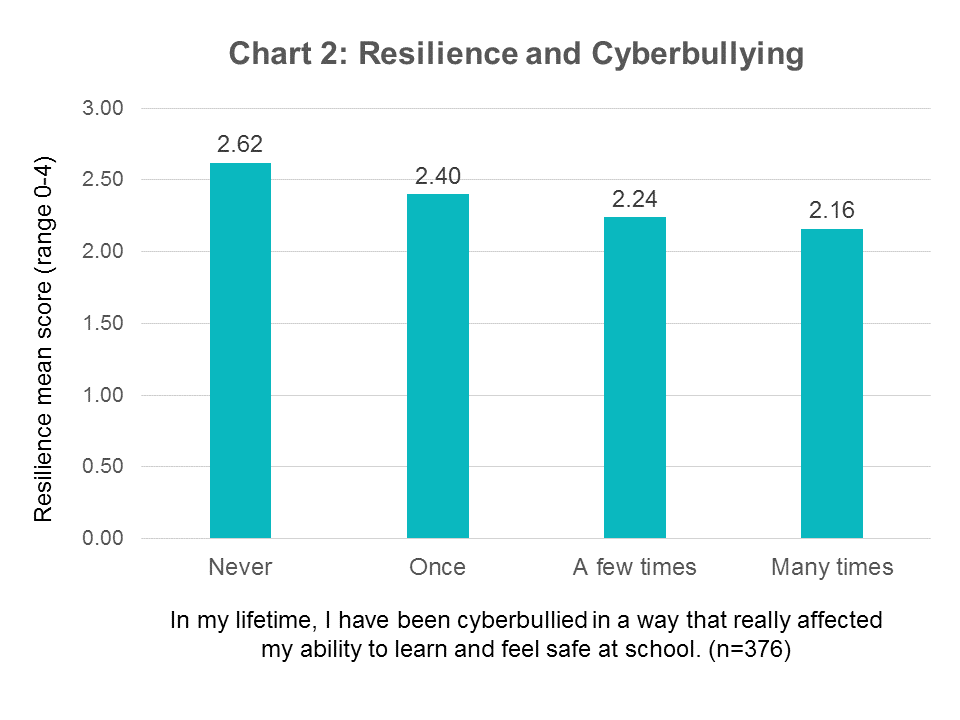 Next, Chart 2 illustrates a similar pattern when considering cyberbullying.  Here again, when considering students that had been harassed or mistreated in some way online, those with the highest levels of resilience were never phased by it in terms of their learning or feeling safe at school.  Those with the lowest resilience indicated that it definitely affected their school experience many times.  I should point out here that most cyberbullying aggressors are actually peers from school (Hinduja & Patchin, 2015) and so one would think that it would affect the targets in meaningfully detrimental ways.  It did, but much more so for those who had low resilience. 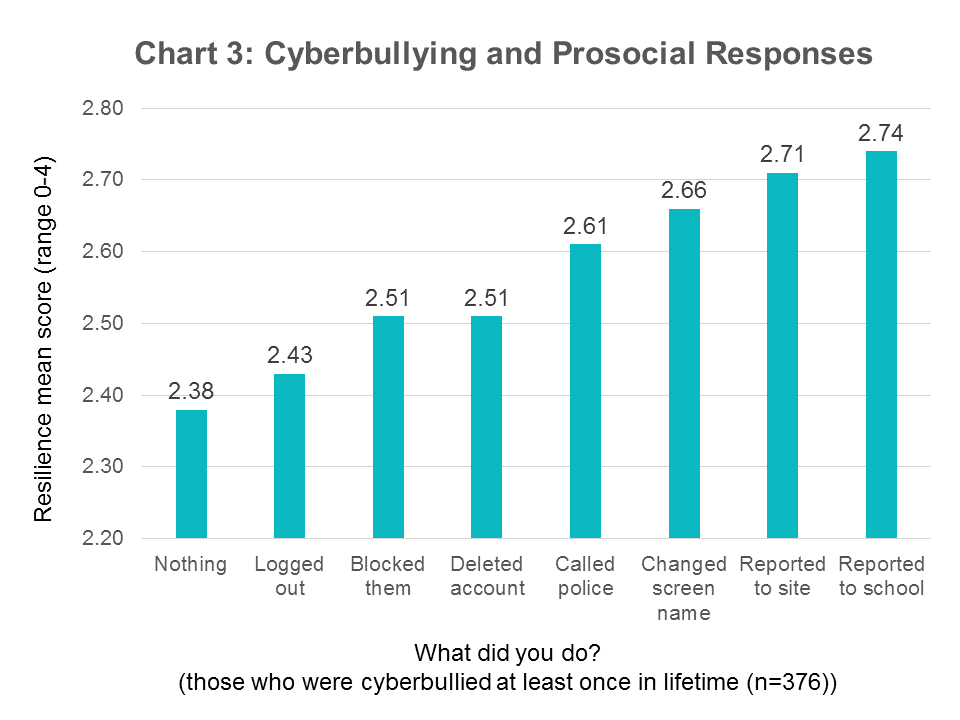 Here in Chart 3, it is clear that those with lower resilience – when cyberbullied – decided to do nothing, whereas those with higher levels of resilience did all of the things that parents and educators want students to do.  We want them to reach out to the school.  We want them to engage in prosocial, healthy responses like blocking, reporting, and deleting – instead of acting out in antisocial ways or, heaven forbid, doing nothing and just suffering silently.  We want them to know that they have agency and do what they can do to control their online experience and make the situation better.  Based on this finding, it seems that youth-serving professionals can remind kids until they are blue in the face to do all of these positive, constructive things when they are victimized, but unless they have higher levels of resilience, they simply will not.  Improve their resilience, and you improve their ability to respond in a healthy way. 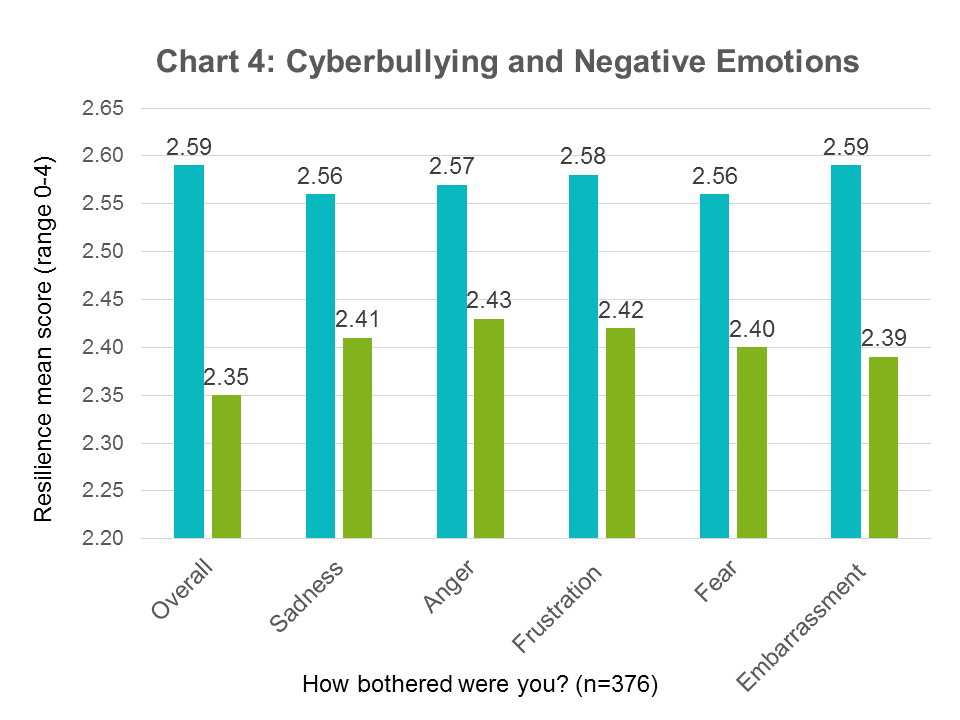 Finally, in Chart 4 we see a clear link between resilience and negative emotions.  The bar on the left in each grouping (blue) represents “Not Bothered” while the bar on the right (green) represents “Bothered.”  Among those students who were cyberbullied, those with higher levels of resilience were less likely to be bothered overall by the cyberbullying, and less likely to get sad, angry, frustrated, fearful, or embarrassed because of the cyberbullying.  Why does this matter?  In the field of criminology, research consistently demonstrates that youth who experience these negative emotions often haven’t developed positive coping mechanisms to reconcile them, and so they end up acting out either in self-harm or interpersonal harm and violence (Agnew, 1992; Baker & Pelfrey Jr, 2016).

We obviously don’t want our kids – when they are harassed – to go off on someone else in an aggressive or violent manner, or do damage to themselves.  Those kids with lower resilience indicated these negative emotions were present because of the cyberbullying, and as a consequence are primed for those unhealthy behavioral choices.  Those with higher resilience were, by comparison, not really affected and therefore not primed to hurt themselves or others in response.

There is so much more to say about the role of resilience and so please stay tuned for more findings from our latest dataset as we plumb its depths.  As I mentioned, I’ll soon flesh out what educators and parents can do to cultivate resilience in the youth they care for and serve.  Meanwhile, I personally ask that you further open your mind to the possibility that while it would be amazingly wonderful to actually create and maintain a world around our children that is perpetually friendly, compassionate, kind, and uplifting – that is not real life.  And we can prepare students for life by intentionally prioritizing resilience training through caring relationships, high expectations in their ability to prevail, and meaningful opportunities to embrace hardship and then rise up and overcome.

Benard, B. (1991). Fostering resiliency in kids: Protective factors in the family, school, and community.

The Role of Parents in Preventing Bullying and Cyberbullying
February 1, 2022