More on the Link between Bullying and Suicide

Last week I received an email from Martin Cocker, a friend and colleague who runs the Netsafe organization in New Zealand. Netsafe is a one-stop shop for all things related to online safety. If you are a New Zealander who is being mistreated online, or work with someone who is, Netsafe can help. Last year I spoke at their “Confronting Online Harm Together” conference in Auckland. Suffice it to say, Netsafe and their affiliates do great work in this space and we are happy to work alongside them in their efforts.

The email included a question about our research on the connection between bullying and suicide. Regular readers of this blog will know that we explore that issue fairly often, both empirically and editorially. Martin mentioned that there was a quote attributed to me circulating in New Zealand which was “One in five young people that have been bullied will have suicidal ideation.” I don’t remember saying or writing this, but we do have data that can shed some light on whether it is accurate.

The Complicated Connection Between Bullying and Suicide

First of all, it is actually not all that uncommon for adolescents to think about suicide. About 18% of all students in the U.S., irrespective of if they had been bullied, report experiencing suicidal ideation (they have seriously considered attempting suicide during the past 12 months). This number comes from the national Youth Risk Behavior Surveillance System (sponsored by the Centers for Disease Control and Prevention). We found roughly that same rate among all of the students in our 2010 (20%) and 2016 (16.1%) studies. When we look more closely at our 2016 data with a specific focus on bullying experiences, however, we can see that students who reported being bullied are significantly more likely to report suicidal ideation (see Table below). 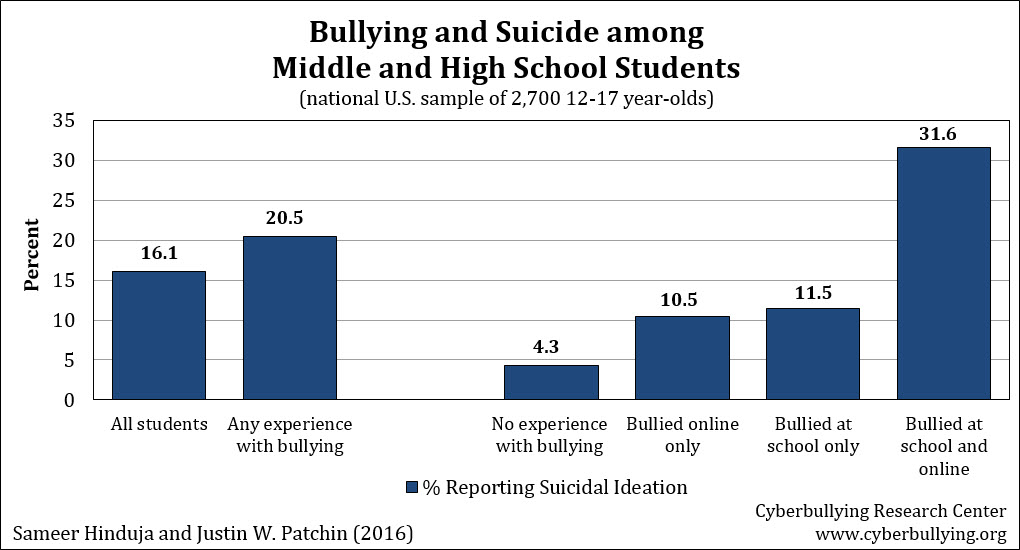 Other Published Research on Bullying and Suicide

There has actually been quite a bit of research exploring the relationship between bullying and suicide. In general, most studies do find a connection. In a review of 37 different studies published in academic journals prior to 2008, Kim and Leventhal found that “most of these studies reported positive associations between all bullying types and suicidal risks” (p. 149). In our paper published in 2010, for example, we found that middle-school students who were bullied or cyberbullied were nearly twice as likely to also report that they had attempted suicide.

Even though most studies find a correlation between bullying and suicide, many suffer from methodological limitations that reduce our confidence in the nature of the connection. Most notably they analyze data collected at one point in time (e.g., “cross-sectional data”). As a result, it is not possible to know if the bullying happened before a student thought about–or attempted–suicide, a key criterion in determining causality. Additionally, many studies fail to control for other factors known to be related to suicide (namely, depression or pre-existing mental disorders). Despite these limitations, though, I’m not aware of any published study that has found no association between bullying and suicide (or an inverse relationship: that is, one where those who are bullied are less likely to consider suicide). So while the connection is complicated, it is there.

By the way, we are currently putting the finishing touches on yet another academic article that explores the bullying-suicide link. Like our other studies, we only collected data at one point in time so we still aren’t able to say with any certainty that “experience with bullying causes one to consider or commit suicide.” But it does add one more paper to the pile that shows a correlation between experience with bullying and suicide (particularly focusing on more serious forms of bullying). So stay tuned for more information on this latest research.