Thirteen-year-old Amanda Todd made a mistake. The British Columbia teen had just moved to a new town and turned to the Internet to meet people. She’d been chatting online with a man whom she’d become interested in. He said she was pretty. After more than a year of communicating with the man, he convinced her to flash her breasts via a webcam. She trusted him. Unbeknownst to her, he had taken a screen capture of her exposing herself. Not long after, he began threatening Amanda, saying he would distribute the images to her classmates if she did not give him more sexual content. After years of online stalking, public humiliation, and cyberbullying associated with this experience, Amanda hanged herself at home, just a few weeks before her sixteenth birthday.

This incident introduced the world to “sextortion,” which we formally define as the threatened dissemination of explicit, intimate, or embarrassing images of a sexual nature without consent, usually for the purpose of procuring additional images, sexual acts, money, or something else. Most often, a person sends an explicit image to someone voluntarily (usually a romantic partner or interest), and that person threatens to disclose the image to others if some demand isn’t met.

Despite the tragic stories we hear about in the media, there has only been two studies that have examined sextortion. In 2016, researchers from the Brookings Institution searched court records and news stories to find 78 prosecuted criminal cases involving 1,397 known (and untold more unknown) victims of sextortion. The vast majority of victims in these cases were female and every single prosecuted perpetrator was male. Among cases involving only minor victims, social media manipulation or misrepresentation (also known as “catfishing”) was involved in most of the incidents (91%), while hacking of targets’ computers or other devices occurred in 9%.

That same year, Janis Wolak and her colleagues at the University of New Hampshire partnered with the nonprofit Thorn to study sextortion using a sample of adults who responded to Facebook or Twitter ads asking for information from those who had been the victim of sextortion. In total, 1,631 adults responded to the survey; 572 of whom stated that they were 17 years of age or younger at the time they were victimized. Most (three-fifths) of those who had been targeted when they were young knew the perpetrator in real life prior to the incident. Most of the sextortion incidents reported did not occur furtively, for example, through secret recordings, hacking, or the stealing of images and video. Instead, targets tend to voluntarily provide the images to persons they trusted or were tricked into providing them (with promises of, for example, money or a modeling career).

While the Brookings Institution and University of New Hampshire studies were essential first looks into sextortion, many questions remain. In addition, neither of these asked adolescents themselves about their experiences with sextortion. So we did.

We included questions about sextortion in our 2016 national survey of middle and high school students. Results of this research were just published in the journal Sexual Abuse. In short, we found that 5% of 12-17 year-olds had been the victim of sextortion and 3% admitted to sextorting others (2.2% were victims and offenders). Boys were significantly more likely than girls to have participated in sextortion (both as a victim and offender). We didn’t find much of a race or age effect, though students who self-identified as nonheterosexual were significantly more likely to have been the victim of sextortion. Most of the adolescents who were victimized said it was a boyfriend or girlfriend (32%) or other friend in real life (22%). Only about 5% said it was someone they didn’t know very well. Many youth didn’t tell anyone about the incident, though girls were significantly more likely than boys to have told a parent. 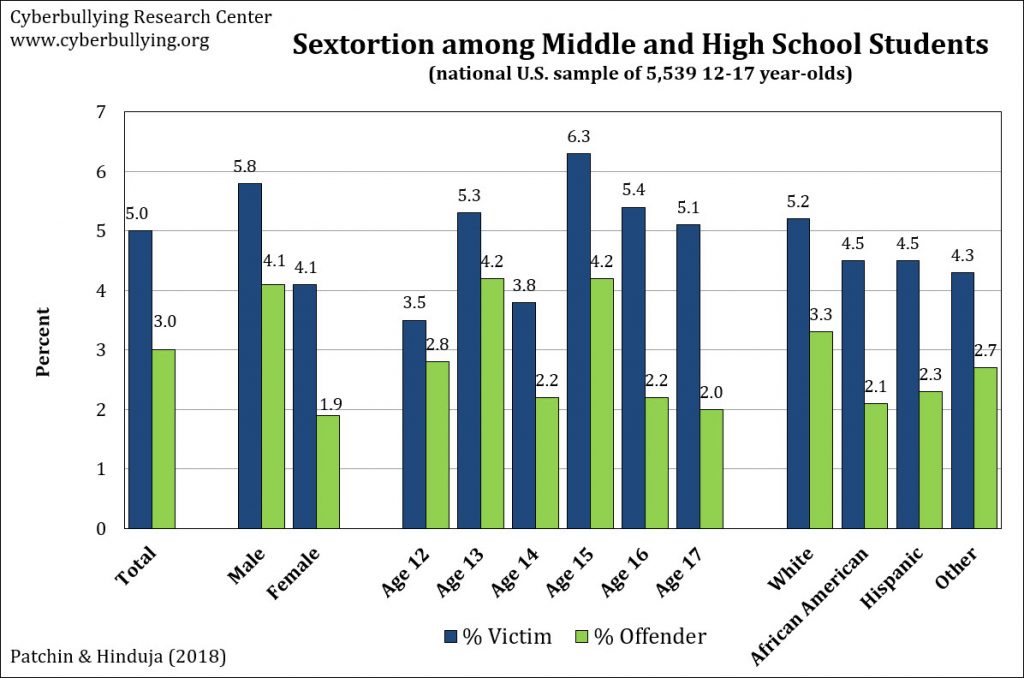 Even though this is the first study of its kind, we finished it with more questions than answers. While we now have a basic understanding of how many youth experience sextortion (along with who targeted them and who they told), we still don’t know anything about the motivations for the person making the threats. We also don’t know why some youth report it to authorities and others do not. We can speculate that embarrassment or the fear of being labeled a sex offender (in most cases they sent the image voluntarily to begin with, so technically they distributed child pornography) will prevent many from coming forward. We do need to create safe avenues for children who make these mistakes to get them resolved without fear of reputational or criminal reprisal. Hopefully then the incidents will not escalate to the point where youth feel trapped and–like Amanda Todd–view the most extreme response as their only one.

You can read the full paper here. If you have trouble accessing it, just drop us a note and we’ll send you a copy.

Photo by Alvaro Uribe on Unsplash