Many people like to ask me what works to stop cyberbullying when it happens. While I have some ideas on this question (over 15 years of studying the problem will lead to more than a few thoughts!), Sameer and I also like to hear directly from students about what they think will work, and—maybe more importantly—what has worked for them when they have been cyberbullied.

In our most recent survey of approximately 5,700 middle and high school students from around the United States, we once again asked them to give us their take, in their own words, on what works. Among the 1,880 respondents who told us that they had been cyberbullied at some point in their lifetime (about one-third of the total sample), nearly 1,300 weighed in with detailed comments on what helped stop the behaviors. I recently reviewed all of their comments and coded them into several unique categories. The chart below includes the most commonly reported responses they provided. 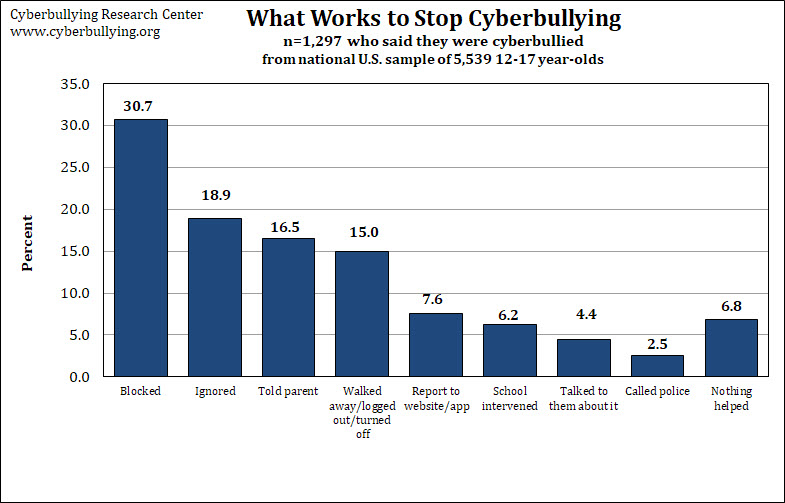 By far the most commonly reported response by teens was to block the person doing the bullying. Nearly one-third of those who had been cyberbullied told us this had worked for them. A 16-year-old girl from Ohio said: “I was able to stop it by blocking the person. They then opened another account and left mean comments. I threatened to report them to Twitter and they stopped. I guess they were worried about getting banned from Twitter so they stopped.” A 17-year-old girl from New Jersey agreed: “Based on my experience, the best action was to simply block that person and delete all traces of the bullying (comments, messages, etc). Followed by a nice chat with a good friend, to talk out how it affected me and why, then put it behind me. However, when it comes to cyberbullying from someone who you know in real life, it is still a good idea to block them, but you should retain all evidence and report the situation to a parent and administrator at your school.”

Another frequently reported solution was to just ignore the cyberbullying. Many students told us that when they ignored it, eventually the mistreatment stopped. A 16-year-old girl from Texas responded: “Let time pass and they finally left me alone. I guess they got bored when no one responded the way they wanted them to.” A similar sentiment was expressed by another girl from Texas, a 12-year-old: “I ignored it and pretended it didn’t bother me. If they can’t get a reaction they leave you alone and move on to someone else.” A 15-year-old boy from Virginia told us: “For the most part bullies feed off a person’s reaction – so one of the best ways to get it to stop is to ignore, but you should always tell someone (parents or friends) just so someone else knows what might be going on.”

It is good to block or initially avoid the bully, and try to ignore their bullying–by going a different way and behaving in a calm, noncontroversial manner. If this doesn’t work, I tell a friend or my mom, who will help confront the bully and try to resolve the situation privately and civilly. If this doesn’t work, go to Plan 3, and tell my counselor who will take professional means to help. I go from the path of least resistance to more aggressive counter-remediation depending on the situation, and the bully’s behavior. It is good to keep your cool, but resolution is needed. –17-year-old girl from Illinois

About half of the students who had been cyberbullied told us that they had reported the experience to their parent(s). This is the highest rate in any of our surveys! And in many instances, telling parents actually seemed to help. When asked to tell us what worked to stop cyberbullying, almost 17% of respondents said telling their parent(s) was helpful. A 13-year-old boy from Louisiana said: “Telling mom and dad was the most important decision I made. Trying to hold it in or ignore it was not working and only made me feel worse.” Another 13-year-old boy, this one from California, said: “I told my mom and dad what was happening and they asked me how I felt about it and what we should do about it. I ultimately blocked this person on Xbox live and reported him to Xbox live.” A 12-year-old boy from Colorado expressed how his parents helped him realize that the bullying wasn’t about him: “My mom and dad just talked to me about how people that do that sort of thing have bigger issues and they are just trying to hurt you to make themselves feel better. It helped me learn to look past the hurtful things people say and do.”

Quite a few students said that their parents talked to the parents of the one(s) doing the bullying, and that worked. A 12-year-old boy from Arkansas said: “My dad showed me how to block the person on Facebook and how to block them on my phone. He also phoned the person’s parents and told them if it happened again he would phone the police.” A 13-year-old girl from New York also had a positive experience when her mother contact the parents of the one doing the bullying: “It stopped when my mom went to the kid’s parents and told them about it and she said if it didn’t stop she was going to call police and show them the evidence of the bullying because she saved it all as proof.” I’ve been skeptical of this approach (see my earlier blog post), but perhaps it is worth considering in certain circumstances.

My parents talked with the parents of the other student. My parents encouraged me to block the student and to change my screen name and passwords. I think the fact that my parents called the other student’s parents and went right to the source helped. –16-year-old girl from Illinois

Many students told us that they took a temporary break from technology or shut down their account altogether to fend off the online bullying. A 13-year-old boy from Georgia said he “stayed off Xbox live for a few days and blocked the other player.” A 16-year-old boy from California said “I would log off for a while, and I would change my username or email, and that seemed to work the best.”

We’ve always been reluctant to advise students to avoid technology as a response to cyberbullying, but here again it could be useful in specific situations. Those who are being cyberbullied should not be punished (by missing out on all that technology has to offer) for the misbehavior of others. Indeed, a 14-year-old girl from Indiana said: “My mom made me get off all social media sites which wasn’t fair to me to be punished because of kids being mean to me but she said that was the only way to avoid it because the kid’s parents weren’t taking it seriously and the police weren’t either.”

Reporting abusive behavior on the website, app, or game was also a commonly used technique. Students acknowledged that interacting in these online environments was a big part of their lives and the threat of being kicked out of a game or having your profile shut down was a deterrent to some. A 16-year-old boy from New York said: “Blocking the person and reporting them for abuse to the site usually works. Social networking is their life and if they are blocked, muted, or banned it will solve the problem online but might also cause more real life problems.” Similarly, a 16-year-old boy from Kentucky said: “When people start saying inappropriate things in game chat, reporting them usually gets them banned instantly and the problem is over.” Some pointed out that it is often easy to create a new online persona, which can be used to continue the cruelty, but this wasn’t something that seemed to occur all that often.

In conclusion, students are using a variety of strategies to stop cyberbullying. Some of these may be more effective than others, depending on the circumstance. Indeed, we struggled with offering advice in writing our book for teens (Words Wound: Delete Cyberbullying and Make Kindness Go Viral), because there just simply isn’t a single magic bullet. In the end, we decided to include as many potentially viable options that we could think of and let the reader decide what would be best in their unique situation.

Adults: We encourage you to discuss these possible responses with the young people in your lives. Make sure they are fully equipped to handle a cyberbullying situation should it arise. Also convey to them that you are there to help should things escalate beyond their abilities. Students: Apply these suggestions when confronted with cyberbullying. Talk with your classmates about these and find out what has worked for them. Feel free to add your ideas to the comments below. We’re all in this together and can learn from one another.