Digital Self-Harm: The Hidden Side of Adolescent Online Aggression

“You should jump off a roof and kill yourself.”

“You’re pathetic and don’t deserve to be alive.”

“If U don’t kill yourself tonight, I’ll do it for you.”

Each of these comments was recently posted to a popular anonymous social media app. I was contacted by a police officer who was investigating the incident. We discussed what was sent and I connected him with my point of contact at the app company. Within hours, it was learned that the recipient of these hurtful messages was also the sender.

Digital self-harm, as it has been termed, occurs when an individual creates an anonymous online account and uses it to publicly send hurtful messages or threats to one’s self. We formally define digital self-harm as the “anonymous online posting, sending, or otherwise sharing of hurtful content about oneself.” Most commonly, it manifests as threats or targeted messages of hate – the more extreme and rare forms of cyberbullying.

These behaviors first entered the public spotlight in 2013 when it was learned that 14-year-old Hannah Smith, from Leicestershire, England, had anonymously sent hurtful messages to herself on the social media platform Ask.fm in the weeks leading up to her suicide. More recently, 15-year-old Natalie Natividad from Hebbronville, Texas ended her life last November after enduring bullying at school and online. Anonymous messages directed to her on the app After School called her “ugly” and said “she should kill herself.” When After School investigated, they learned that Natalie had posted the messages herself.

There’s been increased focus in clinical, school, and community settings on traditional forms of self-injury among teens (e.g., cutting and burning), not only because of the damage that is physically done and the internal turmoil it betrays, but also because self-harm has been linked to suicide. However, the digital version of self-harm – also referred to as self-cyberbullying, cyber self-harm, or self-trolling – has not received the same scrutiny. Social media researcher danah boyd first wrote about digital self-harm in a blog post in 2010, and speculated that it may reflect a cry for help, a desire to look cool, or an effort to trigger compliments as others defend against the harassment. A year later, psychologist Elizabeth Englander explored the phenomena among a sample of 617 college students and found that 9% had digitally self-harmed while in high school (13% of boys and 8% of girls). Despite these early efforts, no study to date has empirically examined digital self-harm among a sample of middle and high school students.

As regular readers of this blog know, last fall Sameer and I collected data from a national sample of over 5,700 middle and high school students where we asked about, among many other things, digital self-harm. The results of this analysis have just been published in the Journal of Adolescent Health (if you have trouble accessing the paper from the journal web site, just email us and we’ll send you a copy). In short, about six percent of those who responded said they had anonymously posted something online about themselves that was mean. More boys admitted to doing it than girls (even though all media mentions of digital self-harm have thus far involved girls). We also identified several correlates of digital self-harm, including: being non-heterosexual, experiencing bullying at school or bullying online, using drugs or participating in deviant behavior, and having depressive thoughts and participating in off-line self-harm behaviors. 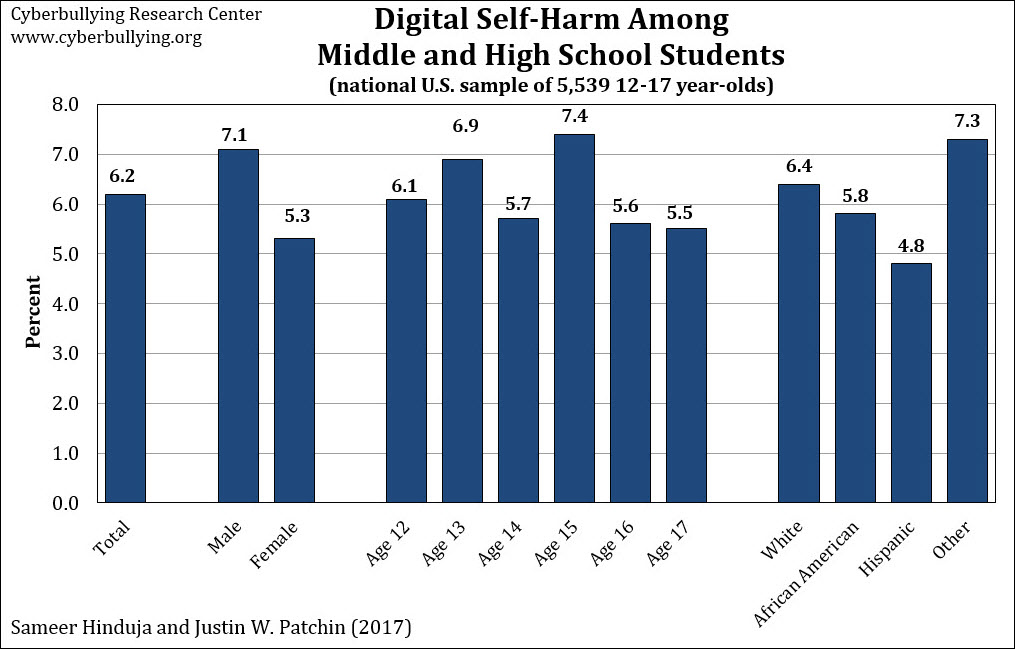 Curious about the motivations for such behaviors, we also asked students who participated to tell us in their own words why they did it. Several common themes emerged. Some said they did it to be funny or because they wanted attention (“Because I feel sad and needed attention from others.”), while others mentioned that they were looking for a reaction from their friends (to see how—or if—they would respond) (“I wanted to see if someone was really my friend.”). Still others reported issues with low self-esteem or self-hate (“Because I already felt bad and just wanted myself to feel worse.”). To be sure, more qualitative research (perhaps through focus groups or in-depth interviews with those who have done it) is necessary to understand more fully what would cause youth to post hurtful messages about themselves online.

While ours is the first attempt at systematically exploring digital self-harm among adolescents, we only scratched the surface as far as clarifying what is happening and why. We encourage other researchers to explore these behaviors in more sophisticated ways in their samples. We hope to dig deeper in future studies to further illuminate relevant contributing factors.

Here’s a key takeaway: Parents shouldn’t ignore the possibility that hurtful message received online by their child were sent by their child. Similarly, educators, law enforcement officers, or others charged with investigating cyberbullying incidents should remain open to the possibility of digital self-harm, and conduct a thorough examination of all available evidence to get to the bottom of the incident. In short, any time a student experiences cyberbullying, there is a problem that needs to be resolved. Even if—no, especially if—the sender and receiver are the same person.