Bullying, Cyberbullying, and Suicide Among US Youth: Our Updated Research Findings 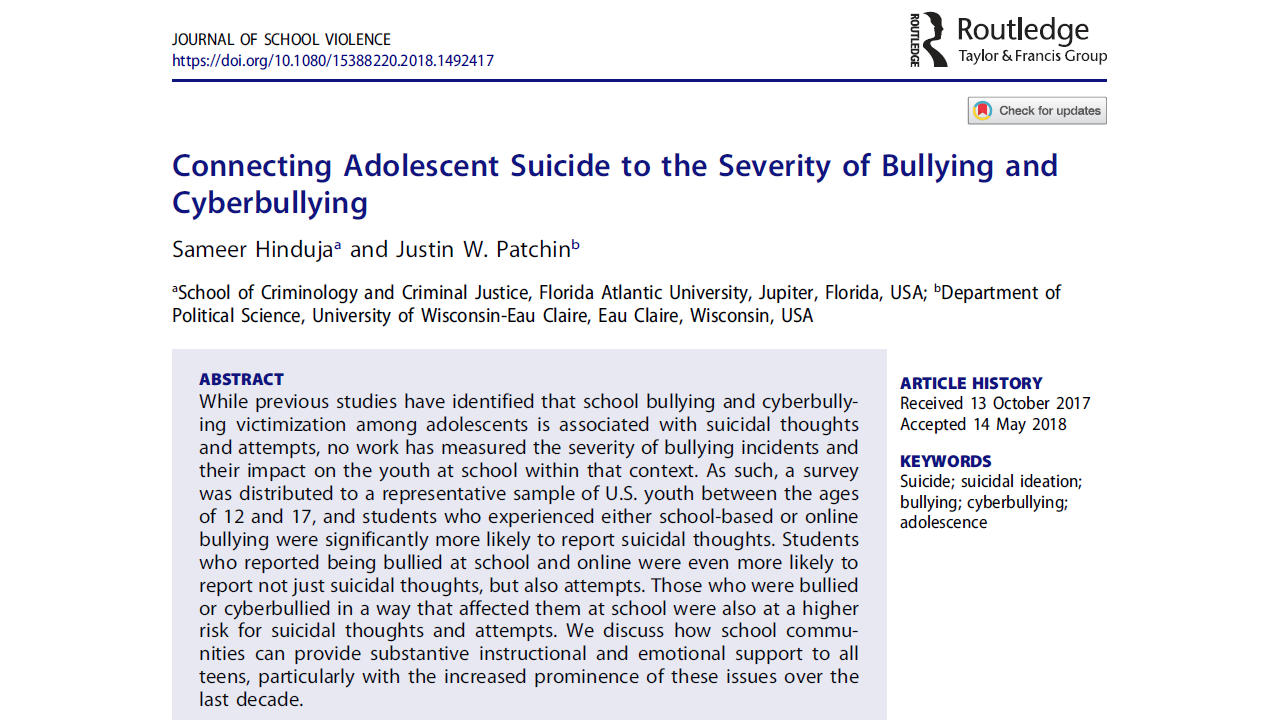 There continues to be a lot of discussion involving bullying, cyberbullying, and suicide both in the media as well as in social circles of parents, educators, and other youth professionals. I just looked up “suicide and bullying” on Google News and in just this past weekend alone there are multiple stories involving different kids in different states who have taken their life in part due to peer harassment and cruelty offline and/or online. And almost every time I visit different school communities, this topic comes up in conversation. Even though it is such a heavy and tragic subject, it has seemed to galvanize adults in their efforts to care even more about youth as they navigate the challenges of adolescence these days.

Very recently, we received word that our latest paper on the topic – entitled “Connecting Adolescent Suicide to the Severity of School Bullying and Cyberbullying” was published in the Journal of School Violence (Impact Factor 2.721). You can access it here; reach out if you have trouble obtaining it.

For those who don’t want to read the article, or who simply want a summary, I thought I’d share a bit about the piece below.  I have italicized the most important points. If you have any questions, just ask and I can clarify or expand upon anything.

Our data for the study came from a survey administered to a nationally-representative sample of English-speaking 12 to 17-year-old middle and high school students across the United States (mean age = 14.5). Our final sample of 2,670 was evenly divided by sex (49.9% female, 49.6% male) and comparable to the population of middle and high school students in the U.S. by race (66% of the sample is White/Caucasian, 12% is Black/African American, 11.9% is Hispanic/Latin American, and 10% were another race).

They included:
[in the past year, have you]
(1) felt so sad or hopeless almost every day for two weeks or more in a row that you stopped doing some usual activities;
(2) seriously thought about attempting suicide;
(3) made a specific plan about how you would attempt suicide; and
(4) seriously attempted suicide.

In addition to suicidal ideation, we also wanted to focus on the subset of students who have engaged in suicide attempts.

Cyberbullying represented the student’s experience in the previous 30 days as a victim of eleven different forms of cyberbullying. This measure also included a variety of behaviors (“Someone posted mean or hurtful comments about me online”; “Someone threatened to hurt me while online.”).

Finally, to explore the importance of the magnitude (or relative seriousness) of the bullying experience, we included four single-item indicators (two each for school bullying and cyberbullying) that assessed the student’s view of how serious the bullying incident was. We first asked students who reported that they had been bullied (at school or online) to rate on a scale of 0 to 10 their overall experience with school bullying and cyberbullying during the last 30 days, with 0 meaning they were not bothered at all and 10 meaning they were really hurt and bothered. Next, we asked students whether they had been bullied or cyberbullied in a way that “really affected their ability to learn and feel safe at school.”

Finally, we looked at the impact of serious bullying on suicidal thoughts and attempts among subsamples of those who had been bullied only at school or only online. As expected, even among those who had been bullied, the more serious incidents of bullying or cyberbullying all had a significant and positive association with suicidal ideation and suicide attempts. Specifically, students who ranked their experience with school bullying or cyberbullying as 6 or higher on a scale that ranged from 0 to 10, or indicated that the experience seriously affected them at school, were more than 3x as likely to report suicidal ideation compared to those who had relatively less serious experiences with school bullying and cyberbullying.

Finally, students who reported that their experience with school bullying or cyberbullying affected them at school were at the highest risk for suicidal ideation and attempted suicide.

In line with findings from previous studies, middle and high school students who experienced either school-based or online bullying were significantly more likely to report suicidal ideation. Contrary to the relatively consistent finding in the limited research base that cyberbullying victimization is more strongly tied to suicidal ideation and attempts than school bullying, we found a stronger relationship with the latter. That said, experiencing both forms of bullying compounds the negative effects and greatly increases the likelihood of suicidal ideation among adolescents.

When it comes to suicidal attempts, our research did not find a significant association with school-based or online bullying by themselves – contrary to findings from previous studies. However, experiencing both together was linked to an exponentially higher likelihood of trying to take one’s own life. Perhaps some students can manage the emotional and psychological harm associated with a limited amount of victimization in one environment or the other, but are seemingly much less so able when the impact is amplified through its occurrence and persistence both at school and online.

This point is supported by the relationship between the severity of incidents and suicidal ideation and attempts. Those adolescents who rated their victimization as more severe (in terms of a general evaluation of how much they were hurt and bothered, as well as its specific impact on their feelings of safety at school and their ability to learn) were much more likely to report suicidal thoughts (more than three times as likely) and attempts (from twice as likely for serious cyberbullying to more than ten times as likely for school-based bullying), compared to those who experienced milder forms of bullying.

Collectively, these findings bear out the very tangible impact that bullying can have on the mental health of youth today, especially if multiple forms combine and are magnified to plague a student in pointedly negative ways.

At the end of our paper, we discussed the importance of suicide prevention programs, anonymous reporting systems, and the availability of educators at school to meaningfully care about and support students who might be struggling. We also strongly believe that any prevention programming will be incomplete if only championed and led by school personnel. Students themselves must realize that their individual and collective voice is powerful, and that they should press past their hesitations and fears and use it to: raise awareness; set (or reset) appropriate social norms and considerations around bullying and suicide; promote vulnerability, acceptance, tolerance, and kindness; and collectively stand against hate and harassment of all forms.

To make this happen, educators would do well to supplement their formal schoolwide efforts by repeatedly reminding the student body that they need to come through for their classmates with intentionality by encouraging, defending, supporting, and rallying to their aid as necessary. If this messaging is part of the culture on campus, targeted youth may more readily seek support from their peer group, and nontargeted youth may look for opportunities to come through for those struggling because doing so has been institutionalized as normative in that environment.