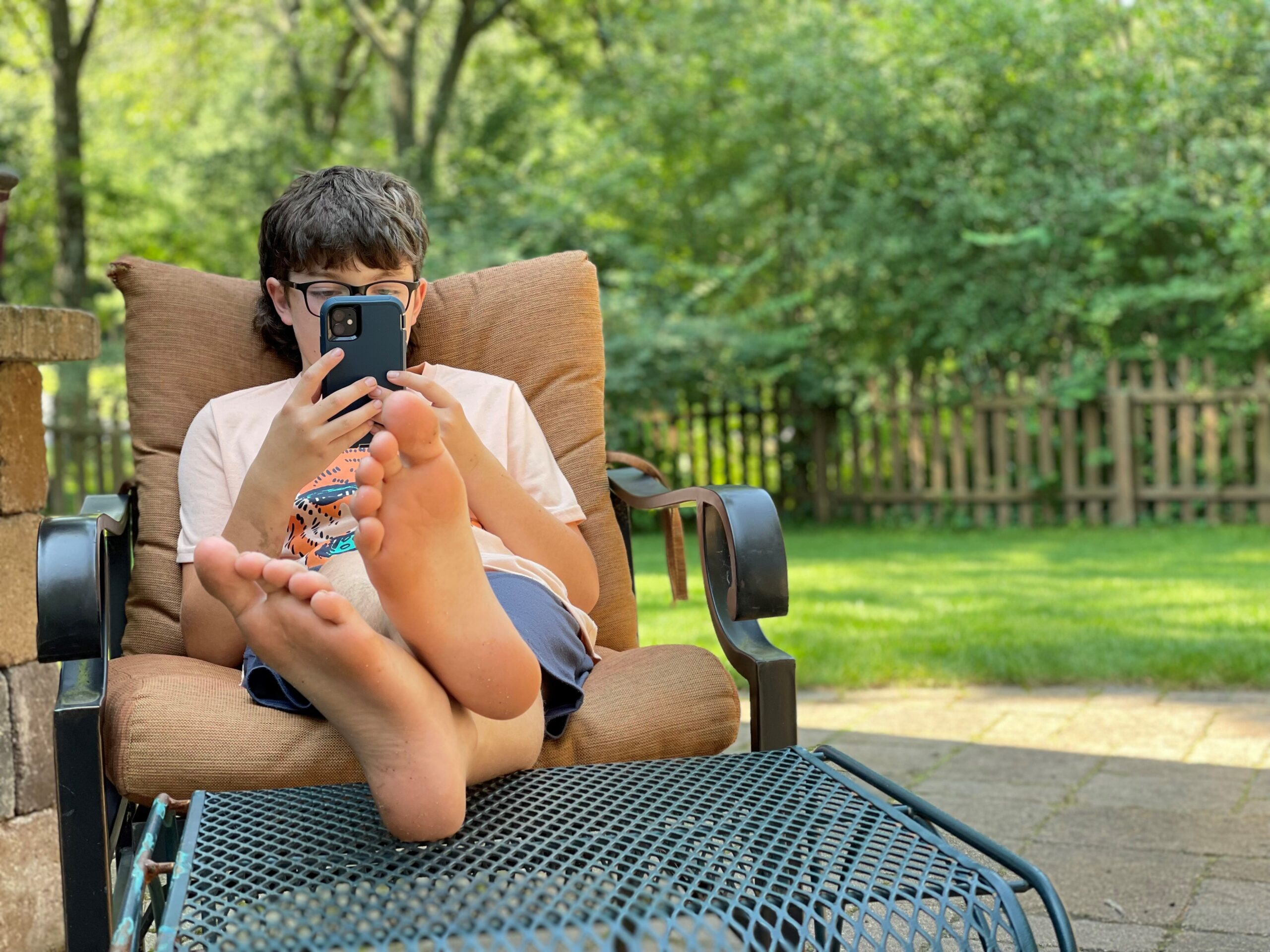 I was sitting in the bleachers of my son’s recent hockey practice when another parent came up to me and sheepishly asked: “Does your son have a phone?” “Funny you should ask,” I replied. Coincidentally enough, we gave our son his first full-functioning phone that very day. I don’t think this particular parent knows what I do for a living, so he wasn’t asking “the expert,” he was simply asking another parent. This led to a nice conversation about what I have learned about kids and devices in my research over the years.

As I’ve traveled the world the last two decades speaking with parents about family technology issues, it is without a doubt the most frequently asked question I get: When should I give my child a phone? There is, of course, no easy answer to this question. It depends on a lot of factors, including the child, the parent(s), and the circumstances. Is the child mature enough to handle the responsibility? Are the parents prepared to provide guidance and instruction? Is the child getting involved in more out-of-home activities that might require calls/texts for pickup? That said, I generally recommend that parents give their kids access to a device at a relatively early age. In doing so, parents can include limits and controls that will help to establish appropriate usage habits. Also, developmentally, during childhood kids are still generally bonded to their parent(s) and will be more likely to give in to parental rules than in adolescence when youth begin to push boundaries, assert independence, and move away from the familial unit toward the friend network as a primary source of influence. Certainly it’s better for young kids to get guidance on device safety from parents rather than peers.

My son starts middle school in a couple of weeks, so we felt it was the right time for a phone. He is being left alone at home more often, and for longer periods of time. It will be nice to be able to call or message him to check in every so often. He wasn’t the first kid in his class to get a phone, and he likely isn’t the last. We learned in our tween study last year that more than two-thirds of 12-year-olds in the United States have their own smartphone. This seems to be about the time that children get phones these days – though the age appears to be getting younger and younger.

Technically speaking, this isn’t really his first phone. He’d been using a very old iPhone for a year or so, but it didn’t have a cellular plan so he was limited to using it where he could access Wi-Fi (at home or his grandparent’s houses). Not to mention the battery wouldn’t last more than an hour or two. But it was a good device for learning the basics and served most of his needs.

The thing is, my son isn’t currently interested in a lot of what a smartphone can do. While he likes looking over our shoulders at funny (and family appropriate) TikTok videos, he’s never asked us for an account of his own. He’s also not into calling, texting, or livestreaming. He had (Facebook) Messenger Kids on the old device, but rarely used it. Friends would send him random messages or stickers, but he would go days or even weeks before replying. He primarily used that device for playing games (his current preoccupation is Terraria) or searching Amazon for survival gear and aquarium supplies. How many of us Gen Xers would spend hours playing Legend of Zelda or looking through the Sears Christmas Catalog? The more things change the more they really just stay the same. He’s also an avid reader and loves listening to audiobooks while wandering the yard looking for frogs, snakes, or insects (the Harry Potter collection will be the soundtrack to his late childhood explorer years).

So for us at least at this point in time, the concern isn’t so much what he is doing on his device, but how much time he is spending on it. Indeed, a couple days after he received the phone, we showed him the Screen Time feature and could see that he used his phone for 7 hours on the first day! This led to us setting time limits for certain apps – an hour for this game, an hour for that app – there really are a lot of great free tools to manage screen time and application usage. And there are many software programs that parents can purchase that provide even more granular customization if necessary.

Nevertheless, it is of course important to prepare all kids for what they might encounter with this new responsibility. For example, he’s already received several calls from unknown numbers (we tell him to not answer them). And just this morning he came to me with a website that had popped up warning him that his phone had been infected with “25 viruses” because he had visited “an Adult website.” The popup instructed him to act quickly to click a link to clean up the device. Now, I know at this point he would never intentionally visit an inappropriate website (he still covers his eyes when there’s kissing on TV!), so that wasn’t an issue. Thankfully he didn’t click on the link because that might have created real problems with the new phone. But this incident gave me an opportunity to talk more about the risks associated with clicking on links that you are unsure of. I also talked about passwords and personal information sharing. This was a chance for me to remind him for the umpteenth time that I am available to help no matter what issues he is facing online (or off – middle school is a gauntlet!).

What I have learned through many years of research and several days of a real-life application, is that this is a momentous occasion to prepare your child and set the ground rules for a lifetime of responsible phone use; take advantage of it. It’s a well-worn but apt comparison: We wouldn’t give our kids the keys to the car without education, good modeling, supervised practice, and regular reminders and check-ins. The same should be true when it comes to their first phone. Like automobiles, phones are powerful tools that enable youth to expand their horizons. Proper preparation and continued unconditional support will go a long way toward minimizing the consequences of inevitable mistakes and missteps.