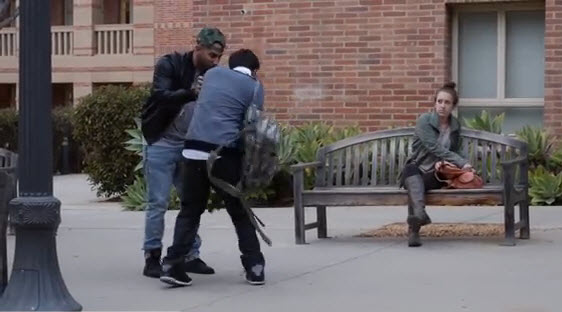 A video has been making its rounds lately showing two young men engaged in a social experiment of sorts. The video shows one hounding, harassing, pushing, punching, and threatening the other because the target apparently failed to do the “bully’s” homework. The two play out this interaction over and over again directly in front of various people at various locations on a university campus, presumably to see who would intervene, and how. To their surprise, most of the onlookers simply ignore or walk away from the “incident.” They just seem to not want to get involved. The actors are critical of this and actually confront several of them afterwards to try to get an explanation. But, my question is: should we have expected anything different?

Many of those who’ve discussed the video on social media, or posted comments on the YouTube video itself, applaud the efforts of these two for apparently exposing a serious problem: people just don’t care. If people genuinely cared, it is reasoned, then they would intervene when they saw bullying happening and it would stop. But this perspective leaves me shaking my head and saying to myself “if only it were that easy.” I have mixed feelings about this little experiment and its potential consequences, and it seems valuable to discuss them here.

Is This Experience Representative?

One of my concerns about this particular approach is that I don’t feel that the situation depicted is realistic. When it comes to bullying overall, there is a lot that happens that doesn’t look like what we see in the video. In fact, I would argue that this is the least likely of possibilities. What is portrayed is very stereotypical (you’ve got a physically more aggressive dude with a backwards hat pushing around a seemingly weaker and wimpier—and smarter?—target). Sure, some young people are bullied like this, but I doubt this scenario represents the norm. It’s true that bullying frequently happens right in front of us. But most often it is a lot more subtle than what is being portrayed in these scenes. It is unlikely, for example, that two strangers are just going to suddenly appear in front of you in the midst of such a blatant physical altercation like what we see.

Admittedly, there’s not a lot of research out there when it comes to bullying among university students, so it is hard to know exactly how prevalent the problem is and what the typical experience looks like. Even so, I doubt that very much of it looks like this: direct physical bullying perpetrated right in front of a stranger in a common area. I’ve been connected to colleges for over half of my life and I have never seen, nor even heard about, situations like this happening. I don’t question that it does happen, but is it really helpful to use a statistically rare incident as an indicator for general response?

What Would You Do?

It’s so easy to watch a video like this and exclaim with passion and confidence that if you were to confront such a situation you would most definitely do something! If we ask people whether they would intervene if they saw someone who was being mistreated, I imagine many would say that they would. But would they really? I mean, it is very easy to envision heroic intervention in times of chaos or tragedy, but it is wholly another thing to actually do it.

Back in November of 2000, Sameer and I were attending an academic conference in San Francisco. At the completion of one of the day’s presentations, we left the conference center and began our mile or so walk to our hotel on the other side of the city when we came upon two individuals fighting in the street. One was flailing punches while the other had his adversary firmly by the hair. For some reason, I instinctively and immediately stepped in to separate them. They were both complete strangers to me but I jumped right in. I didn’t recall what Sameer did while I was trying to break up the melee, but when we talked about this video and remembered and reflected on the incident in San Francisco, he admitted to me that he just froze and felt paralyzed. In hindsight, my interjection was probably foolish: who knows what I was possibly getting myself into! The whole incident lasted less than a minute, and I seriously question whether I would act similarly if put into the same situation today. I think I would, but a person never really knows until actually faced with the situation.

Some might interpret the failure to act as a function of the “bystander effect.” The theory behind this idea is that oftentimes even good and caring people refuse to take action when confronted with someone in need of help. Perhaps they don’t think it is any of their business, or maybe they think others will step in. Maybe they feel it isn’t their place to intervene and behave differently from the social group around them, which gets them to think “no one else is doing anything, why should I?”

The bystander effect was made famous in the tragic murder of Kitty Genovese, who was 28-years-old when she was stabbed to death outside her home in New York City on March 13, 1964. There is nothing exceptional about a New York City murder (there were 635 other homicides in the city in that year), but what shocked the conscience of most people was that the murder was reported to have happened largely in plain sight (even though it occurred at 2:00am) with over three-dozen witnesses but little intervention by any of the onlookers. According to a newspaper story: “For more than half an hour 38 respectable, law-abiding citizens in Queens watched a killer stalk and stab a woman in three separate attacks in Kew Gardens.” Some question the facts as reported in this case (see especially Levitt and Dubner’s Superfreakonomics), but nevertheless, a bystander effect has been well documented in the literature. People just don’t typically leap into action in these kinds of situations.

That said, the bystander effect doesn’t really apply in the cases observed in the video since in most of the situations the bystander was alone, not in a group. The bystander effect usually only applies when a person within a larger group refrains from taking action. In the video, the persons being tested are mostly by themselves. So something else has to be causing the inaction.

I don’t believe that the majority of people failed to act because they were apathetic or uncaring. They were just as likely legitimately afraid for their own safety. Furthermore, we don’t know how many of the people who were leaving the area would have contacted the authorities or taken some other action to resolve the situation once they were in a safe place. I did notice a general theme that most of the bystanders in the video were seemingly mild-mannered and not very physically intimidating (except for one guy that seems to come out of nowhere when he hears the ruckus). Were these particular individuals targeted for this because they were the least likely to respond (especially physically)?

It’s Good to Have Options

In general, I don’t think it is a good idea to compel someone to intervene in a physical bullying incident. If the person feels physically and socially capable, then by all means he or she should. But the truth is that many just don’t. It is true that most who witness bullying do want to do something. So we believe it is crucial to equip teens with a variety of tools they can use should they confront a situation like this.

It is important to remember that, unlike the scenario depicted in the video, most teen bullying happens between, and in view of, people who are known. That is, typically witnesses to bullying either know the one doing the bullying, or the one being targeted, or both. If they are not comfortable stepping in at the moment when it occurs, they still have other options for responding:

– tell an adult that they trust will take appropriate action,
– talk to the one who was being bullied after the fact and offer support,
– anonymously report the incident, and persons involved, to their school,
– report cyberbullying to the website it appears on,
– enlist friends to help resolve the conflict, or
– choose another response that does not place themselves at risk for harm.

Without question, we need to do more to equip and empower teens who witness bullying to do something to help (see Chapter 4 of our new book Words Wound, entitled “Start Standing Up, Not Standing By”) . Expecting that they intervene when they see a physical altercation involving complete strangers, though, might not be the best idea for most young people under most circumstances.

Finally, I am concerned that the popularity of this video may lead to unintended consequences. For example, others may be inclined to pursue similar “experiments” with the hope that their video will go viral. This video has been viewed over 3 million times in just a couple of weeks and teens have been known to do whatever it takes to get noticed. What happens if one of the witnesses intervenes with violence before the performers have a chance to let them know it’s just an act? What if someone has a weapon? Plus, teens may target others for harassment, and – if caught – simply point to their friend in the bushes recording the whole thing, and exclaim “it was only an experiment!”  I’m sure some opportunistic tormenter will attempt to use something like this as a “get-out-of-jail-free” card.

I also fear this video might be viewed by some who are being bullied as further confirmation that no one out there really cares about them or is willing to help. While dramatic, maybe it’s even reasonable to conclude that we are all pretty much alone in the world, given the repeated failures of people to intervene on behalf of others, even when they see victimization occur directly in front of them. I am thinking in particular about a teen who is bullied in a more hidden or indirect way, and struggles to explain his or her experiences to a parent or teacher. If a person who directly observes bullying right in front of them doesn’t think it deserves a response, what hope does the teen who suffers in silence have?