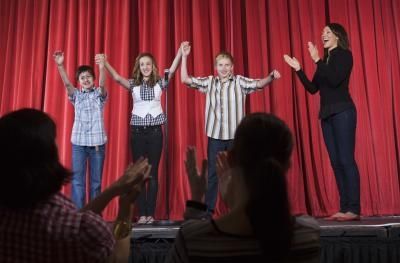 We are always interested in sharing cool ideas that schools are doing to promote positive climates and reduce peer conflict and bullying.  One idea that has worked very well in some communities is the creation and performance of a school play with social norming messages interwoven in the fabric of its storyline. It can include one or several different skits to deliver the actual social norms message of positive online behavior to students in a creative, relatable, and hard-hitting manner. This production can travel to classrooms within the school, be presented to the entire student body or community, or be shown as part of after-school and/or extracurricular youth programming.

A skit might include one character who is sexting a boy she has a crush on while another character, who is her friend, explains that the behavior is not “cool.” The mere mention that other students do not sext may be sufficient motivation to refrain from the behavior. Additionally, the play can be made interactive as the actors can solicit suggestions from the audience and then improvise on these to convey the appropriate social norming message. The skits should be fun and interesting to watch, but they should also be direct and to the point and focus mostly on positive uses of technology among the student body. It is up to the creative talent of the drama department to determine how best to present it with props, acting, and a script. If done well, a theatrical production involving fellow students has the potential to have a positive and lasting impact on the entire student body.

Our colleague Nathan Jeffrey, director of education and outreach for Taproot Theatre Company in Seattle, Washington, recently shared his passion about the value of these anti-bullying plays with us.  We hope that his words foster some related ideas as to what you can do. Also know that you can purchase scripts for these plays from his Theatre to use at your school if you feel that is best for your situation.

Taproot Theatre has been touring social-issue plays to schools in the Northwest for over 25 years, and the Taproot Road Company serves over 90,000 students in the Northwest each year. We began with drug and alcohol prevention plays in the 1980s, and our hope is to be relevant to whatever issues students are facing.  One reason we feel cyberbullying has become such an important topic is that students are now unable to escape bullying when they go home from school. Students can be bullied via text messaging and social media sites 24 hours of every day. Telling students not to visit certain sites isn’t working—wouldn’t you want to know what’s being said about you? As we’ve interviewed school administrators, they’ve expressed the recurring theme that a growing number of school violence incidents begin online and culminate when the students see each other on campus.

In an effort to change the culture of schools, Taproot Theatre premiered the show “New Girl” in 2008. It was a five-character drama in which Rachel, a new student at Clements High School, is pressured into participating in the cyberbullying of one of her classmates. The show dealt with harassment via text messaging, Facebook, and MySpace.

New Girl became one of the most popular secondary school shows in Taproot’s history with over 210 performances from 2008 to 2011. As national tragedies involving cyberbullying took the spotlight in 2010, New Girl was featured on local news shows and in newspapers around the greater Seattle area. Typically, Road Company shows are retired after two years when new material is written, but in the case of New Girl, the production was brought back for a third year due to high demand. Following the success of New Girl and the response from schools, we commissioned “Don’t Tell Jessica,” a play that specifically addresses student interactions via Facebook.

Our plays are designed to spark discussion at a schoolwide level and create a common frame of reference for members of the school community to talk about the problem.  Our shows can empower students who are targeted by bullying to find an ally who can assist them in addressing the problem. Students who exhibit bullying behavior get the much-needed opportunity to see the face of the person getting bullied and can begin to empathize with that person’s pain. We provide teachers with pre- and postshow discussion questions to help students continue to explore the themes of the plays and ask penetrating questions. These cumulatively contribute to the creation and maintenance of a positive climate at school, with the play serving as one of the major catalysts.  We’re trying to help these students find hope. Specifically, it’s the hope that we can all live and work together in a community and school environment where everyone is safe, respected, and valued.