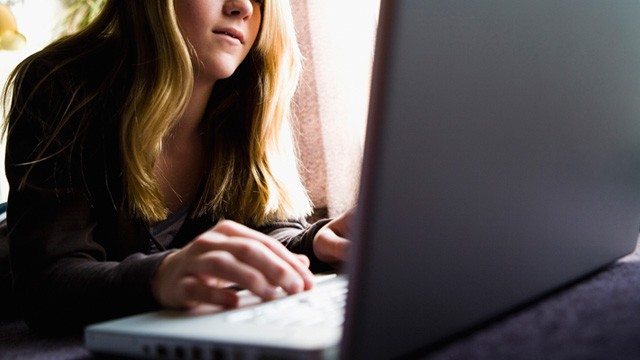 There has been much discussion over the last few days about whether it is appropriate for schools to actively monitor the social media activities of students (I participated in a HuffPost Live discussion about this issue earlier today). At the center of this recent interest is Glendale Unified School District, which is located in Southern California and has a middle and high school student population of about 14,000. The district has contracted with Geo Listening, (a Hermosa Beach, California-based tech company founded in January) to monitor and keep track of the various things their student body says, posts, shares, and does online (at a cost of $40,500 for the school year).

The company states that it actively looks for anything online that could threaten the safety and well-being of students in the district, including cyberbullying and threats of self-harm. These could be posts that are initiated from school, or not; using school-owned technology, or not. The technology also allows for the flagging and reporting of drug use or class-cutting – or really anything publicly posted by a student that could be viewed as problematic to the school.

Here at the Cyberbullying Research Center, we are contacted fairly regularly by tech companies who have developed some technological “solution” to cyberbullying that they are looking to market to schools. We’ve yet to be swept off our feet by any of these proposed solutions, and what Geo Listening is doing is similarly not very innovative or revolutionary. That said, the question remains: should schools be in the business of actively monitoring what their students are saying online?

Most people would agree that parents have a responsibility to keep tabs on what their kids are doing online. This is best accomplished, in my view, by actively participating in the online activities with them and asking questions about what they are posting and who they are interacting with. Parents frequently ask me, though, whether it is a good idea to install tracking or monitoring software on their child’s computer or cell phone as a way to monitor. This is a tough issue. On the one hand, I am not in a position to tell anyone how to parent their kids. So when responding to this question, I simply explain the potential consequences of going this route. If a parent chooses to surreptitiously monitor the online activities of their kids, eventually they will find something that they will have to confront their child about. When they do, and their child finds out that the parent had been spying on them, it will be extremely difficult to repair the harm done as it relates to encouraging an open and trusting relationship in the future.

In general, if a parent thinks it is necessary to take such a step, then I advise them to make their children aware of it. Parents should tell them why they are installing the software and explain that the primary goal is to protect them. Finally, parents should use this as an opportunity to encourage responsible use by telling their children that as they demonstrate safe and appropriate behaviors online over time, they will gradually earn more privacy. This can be a very effective strategy for early Internet users who are still learning how to navigate the World Wide Web safely.  A concern I have is that some parents may fall into a false sense of security when they hear that the school is paying someone to watch over what their kids are doing online and therefore not take the time to do it themselves.

The reality of course is that if a child wants to circumvent tracking and monitoring software, it is pretty easy to do. They will go online from a friend’s house using their device, or log on from another location, such as the public library. I have even had two separate principals in different schools tell me that an 18 year-old senior had picked up a tracfone or other pay-as-you-go device from Walmart to give to their 15 year-old girlfriend, whose mom and dad didn’t even know that she had it. The point is, if you push too hard, teens will go underground which will make it even more difficult to keep up. And finally, research has cast doubt on the effectiveness of monitoring and blocking software in preventing experiences with cyberbullying.

Some argue that schools monitoring social media amounts to a violation of a student’s privacy. I am not particularly convinced of that. Most students I speak with are savvy enough to realize that what they post in public spaces online is open for anyone to see. And they know that schools are looking. Counselors, principals, and school resource officers have been looking for years. The only thing new about this is that a school is contracting with a third party to do the looking.

Most students say that they have their Facebook accounts set to private. Indeed, in our early research into the social media behaviors of students on MySpace (remember that site?), we found that in 2006 less than 40% of students had set their profiles to private. By 2009, 85% of the active users had their profiles restricted. And this was not a survey of students where we asked them to report what they were doing. We randomly selected profiles to carefully review to see how much information was publicly visible. So very early on – over four years ago – students recognized the need to avoid having their profiles open for the whole world to see. Furthermore, more and more teens are moving to ephemeral communication apps like Snapchat that make it more difficult to watch over and track what they are saying.

School Culture is What Matters Most

From my perspective, schools (along with parents, of course) do have an obligation to keep track of what students are doing online. I don’t feel, however, that schools should need to go on fishing expeditions where they scour the Web and social media for inappropriate behaviors. In a perfect world, paying a company to watch over the online interactions of students wouldn’t be necessary. I feel that schools should work to develop a culture where everyone looks out for everyone else and if something of concern arises, someone will step up and take appropriate action. Most of the time, when there is a threat to cause harm—either to one’s self or others—someone sees or hears about it. What do they do at that moment? Are they empowered to take action themselves? Do students feel comfortable talking with an adult at school about what they witnessed or heard about? Do they feel that telling an adult at school or at home would resolve the situation?

There is also the added benefit in that by encouraging and empowering students to come forward with concerns, schools have many more people on the lookout for trouble and are able to access much more potentially problematic information since even private profiles (not accessible to a 3rd party monitoring company) are visible to at least some students.

Consider this contradiction: When you ask a student what they should do if they are being cyberbullied, or if they see it happen, more often than not they will respond with “tell an adult.” Yet, when you ask them if telling an adult would help, they often say no! According to the Youth Voice Project, a survey of nearly 12,000 students from 12 different U.S. states conducted by Stan Davis and Charisse Nixon, only about one-third of the students who were significantly impacted by bullying said that telling an adult made things better (29% said it made things worse!). So perhaps the main problem isn’t so much that schools need to do a better job of paying attention to what is going on online, but instead they need to do a better job thinking about how best to respond (here are some suggestions). If schools are able to respond to bullying and cyberbullying in a way that quickly stops the harassment without further harming or humiliating any of the parties involved, then students will feel much more comfortable going to them for help when problems arise in the future. And the word will spread, encouraging others to also do so. As it is, many are afraid that the school, or their parents, will just make things worse.

So the more important question for me is what do the educators do with the information once they receive it? The company sends the school district a daily report of online chatter that might be important to investigate further. Who is responsible for investigating? Who decides whether something is serious enough to warrant additional scrutiny? Additionally, are schools taking on additional liability by actively patrolling the Internet for problems? What if there is a threat that the school should have seen but didn’t, or if they are made aware of a threat but don’t act quickly enough. Needless to say, there are so many unanswered questions.

Justifiable Use of Resources?

Another question is whether this is a good use of school resources. Where I live in Wisconsin, $40,000 could be used to hire an additional school counselor, at least part-time. At a time when school budgets are shrinking and support staff are routinely being cut, are schools trying to cut corners by relying on a technological solution to a problem? And are they right for doing so? Some schools might use this service as a way to avoid paying for much more comprehensive and effective strategies to prevent online and offline bullying before it happens (e.g., social emotional learning programming). Monitor, respond, repeat. It is always best to prevent these things from happening in the first place, but prevention often costs more up front (even though in the long run it is always much less expensive).

The weight of public opinion seems to be in support of schools paying others to monitor their students online. I’m still not convinced. It makes sense that schools want to be made aware of potentially problematic situations developing online (and the earlier the better). But it remains to be seen whether this tactic will be effective. As a researcher, I would love to evaluate this program. This could make for a valuable research project if a school district would randomly assign schools to participate in this and then follow-up to see if there had been any changes in student perceptions or behaviors. It would also be helpful to know, for example, how many suicides really could be prevented using something like this. Glendale and Geo Listening claim that at least one suicide was thwarted in their pilot test of this last year, but it is uncertain whether someone at the school might have come across the information and reported it without the aid of the service.

We don’t know whether other school districts are also paying others for these services (we’re not aware of any). Geo Listening claims that they expect to be working with more than 3000 schools worldwide by the end of the year. So, this is just the beginning of the discussion we will have. It remains to be seen how this latest experiment in using a technological solution to solve a social problem will work out.