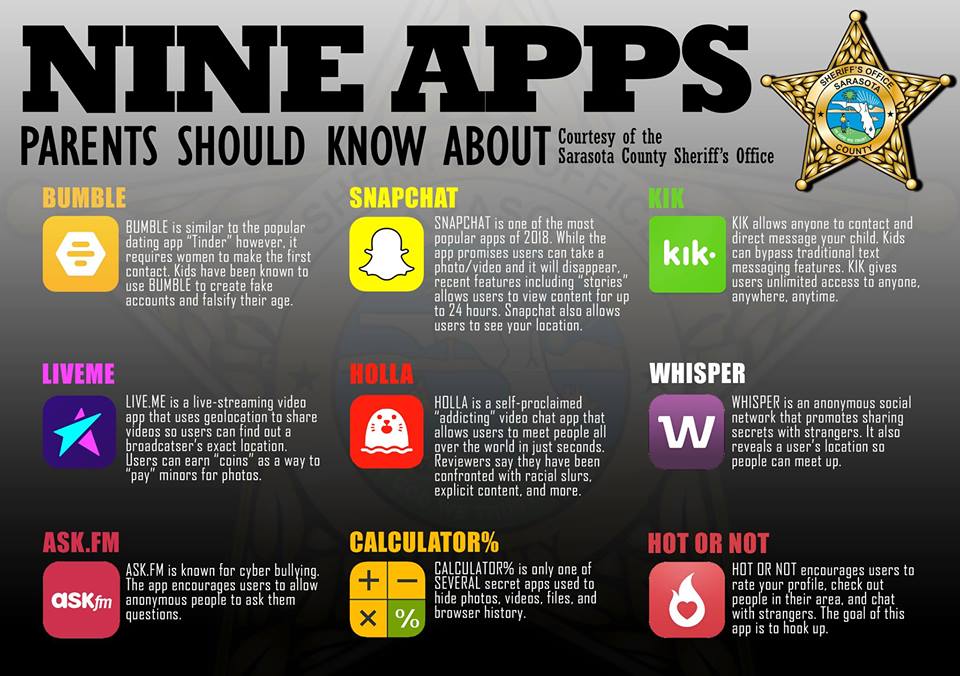 Last weekend a Facebook post by the Polk County (Florida) Sheriff’s Office went viral. As of this writing (less than a week later), the post had been shared more than 58,000 times (including by three of my personal Facebook friends, which is how I came to notice it). This wasn’t a post asking for the public’s help in locating a wanted fugitive or advising residents of the latest online phishing scam. Instead, it was a rant about youth and social media.

The message, while well-meaning, was misinformed and misguided.

It began with an analogy about the importance of teaching children to swim and drive: “When you teach your child to swim, do you just throw her in the deep end of the pool and shout, “Good luck, kid!” What about this – before your child gets a driver’s license, do you just hand over the keys, and go, “Here ya go – figure it out!” I use similar illustrations in my discussions with parents. I couldn’t agree more that it is vital to educate young people about the dangers of these otherwise positive activities. When done with appropriate training and early supervision, the risks associated with swimming and driving can be minimized. While they can never be completely eliminated, I think it is safe to say that the benefits outweigh the potential harms. Indeed, most parents allow their kids to swim and drive.

The same can be said for online activities. The Sheriff advocates for education when it comes to swimming and driving and yet promotes complete avoidance when it comes to online activities. Why? What is so bad about Snapchat and Musical.ly? The potential problems youth might confront (predators, cyberbullies, identity thieves) can be minimized through careful, informed guidance and deliberate instruction. Banning an app is a simple response (on its face, at least), whereas education requires effort. Bans and blockages are easily circumvented while cultivating a connection to your children wherein they respect your authority, even when you are not around to directly supervise them, can last a lifetime. As the Sheriff accurately points out: “The only way to prevent your child from becoming a victim, is to be involved.”

The Sheriff’s post raises the concern of pornography popping up on particular gaming apps. Surely he realizes that pornography is present on most online platforms. Some application administrators do a better job of blocking and removing it, but it is available just about everywhere. The post highlights several messaging apps but fails to remind parents that the kinds of risks raised are evident on any messaging platform. Singling out particular apps isn’t helpful. And I noticed Facebook, Instagram, and Twitter didn’t make the list. Is there something that is different about these online spaces that makes them less “dangerous?”

This is the inherent problem in approaching the issue of online safety from an abstinence perspective. Parents will never be able to keep up with all of the potentially problematic places. It just isn’t possible.

It is also noteworthy that at least two of the apps on the Sheriff’s “dangerous” list no longer exist (Vine, Yik Yak) so I am not sure how they can continue to pose a threat to kids. And there are some online environments that I am genuinely concerned about that didn’t make the list (I’ll refrain from referring to them here to prevent unintentional promotion). This is the inherent problem in approaching the issue of online safety from an abstinence perspective: Parents will never be able to keep up with all of the potentially problematic places. It just isn’t possible. Anne Collier from NetFamilyNews aptly concludes: “So there’s always going to be a site that everybody’s going to love to hate, and we’re not helping children develop the self-respect, empathy and resilience that will truly protect them by getting caught up in an endless frustrating game of whack-a-mole. It also doesn’t help our credibility with our kids. …The sites aren’t the root problem.”

It also doesn’t help our credibility with our kids when we refer to apps that no longer exist.

I have additional concerns with specific statements made in the post:

“And the number one BULLYING APP is………..Sarahah. Seriously, an app FOR bullying. Not to report bullying, but to actually bully others.”

What is this conclusion based on? Very few young people even know about Sarahah (though the post will surely result in more rather than fewer people checking it out). There was an initial interest in Sarahah last summer, primarily just because it was the newest app out there. But we haven’t heard a single complaint about it from a parent or educator in many months. That’s not to say it isn’t creating isolated problems in certain communities, it just shows that it is not the “number one bullying app.”

Bullying happens most often on the apps that are the most popular. Not many youth have used Sarahah. And, if they are bullied on that app, it is pretty easy to block the person from contacting them or to ditch their unique link altogether. Much more bullying happens on Instagram and Snapchat. Not because they are inherently bad spaces, but because that is where young people are currently hanging out. And even so, only about 17% of students in our recent survey said they had been cyberbullied in the most recent 30 days. So most kids aren’t being bullied online.

To be clear, more bullying happens at school than on any particular online platform – primarily because that is where kids are for 8+ hours each day. Are schools “dangerous” because many students get bullied every day? Is the Sheriff suggesting we stop sending kids to school altogether as a means to prevent bullying?

“Roblox…an innocent game, but unfortunately, the 8-year-old kid chatting with your son through this game is probably a 58-year-old unemployed guy named Horace who hasn’t showered in three days.”

I know you are trying to be funny here, Sheriff, and I can appreciate that. But telling parents that their child is “probably” chatting online with an adult masquerading as an eight year-old is being too flippant with a serious, but rare phenomenon. It’s like saying a child will “probably” get struck by lightning while playing out in the rain. Yes, it happens. But it is not the most likely risk they will confront.

“There’s absolutely no reason for your child to be on ANY of these apps.”

I disagree. A recent survey conducted by the Pew Research Center found that fewer than one in four students had “mostly negative” experiences online. Far more said social media was “mostly positive.” They use it to connect with family and friends, meet others with the same interests, and find news and information. I know many students who Snapchat their classmates to aid in after-school studying. They can also connect with international friends or pen pals easily and freely with WhatsApp. To fail to see the value in these apps is to misunderstand how they are used. Understanding how they are used is a necessary first step in being able to communicate safety practices to children.

“Scared yet? You should be.”

Why is the Sheriff working so hard to freak out his 185,000 Facebook followers? Has he learned nothing from the research that has been done on fear-based programs such as “Scared Straight”? The reality is they do not work (and in some cases can have harmful effects). We learn best when we feel safe, and from people we trust, who offer practical, reasonable, and valid information. I understand that the Sheriff sees the worst possible outcomes of online mistakes and outright maliciousness. This is an unfortunate consequence of his line of work. Deputies identify and arrest online predators on a regular basis. They also confront child drownings and motor vehicle accidents with child victims.

But instead of creating panic among the population they serve, the Sheriff’s Office should use their platform to provide information to help parents better understand actual risks, and–more importantly–how to minimize them. The Sheriff said as much in the post: “So why not teach your kid how to safely surf the web?” Yes! Unfortunately the post does not do this. Parents who read it will freak out and quickly become overwhelmed with what they simply cannot keep up with.

Parents instead should work to instill safe online practices that apply to any online environment. Here are a few examples of what kids (and adults) really need to know:

• There are mean people online (and a few predators)
• Don’t retaliate when someone is mistreating you
• Don’t post or send anything you wouldn’t want everyone to see
• Nothing is anonymous
• Everything can be copied and saved
• Copy and save evidence of harm
• If you are concerned, confused, or upset, talk to an adult you trust
• Be kind to others

Following these simple guidelines—as well as swimming with a buddy and not texting while driving—can help to make this summer safe, educational, and fun.