This study surveyed a random sample of 1,963 middle school students (mostly aged 11-14) from a large school district in the southern United States. Data were collected in in the spring of 2007 from 30 different schools. Click on thumbnail images to enlarge. 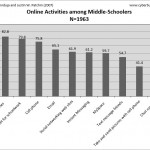 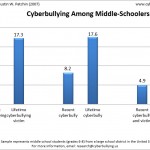 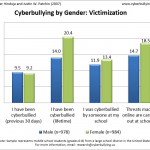 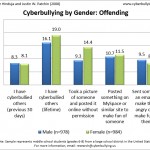 Teen Technology Use. Online games are the most popular activity reported with nearly 83% of students reporting that they had played online games in the previous week. 75% of students now have their own cell phone. Chat rooms are starting to fall out of favor among this population.

Cyberbullying by Gender: Victimization. Adolescent girls are significantly more likely to have experienced cyberbullying in their lifetimes (20.4% vs. 14.0%). This difference disappears when reviewing experiences over the previous 30 days. Girls are also more likely to believe that online threats are carried out at school.

The Challenge of Understanding the Momo Challenge
March 1, 2019

More on the Link between Bullying and Suicide
June 2, 2017