Implications for Society from the Miami Dolphins Bullying Case 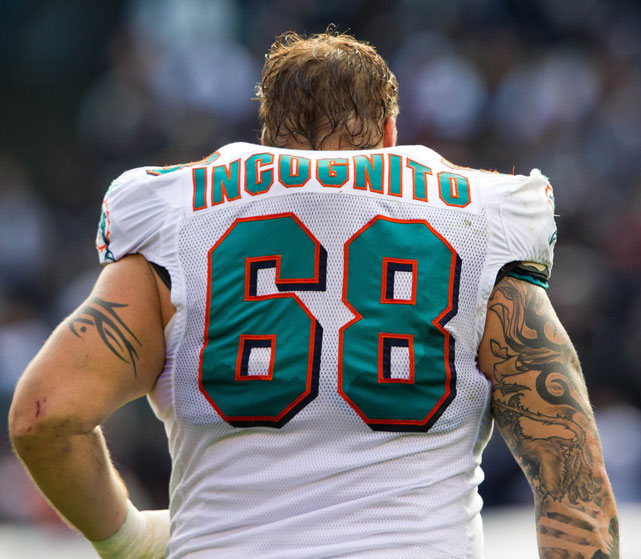 Over the past few days, reports were released involving Miami Dolphins football player Richie Incognito, accused of obscenely harassing, bullying, and threatening teammate and fellow offensive lineman Jonathan Martin in the locker room, via text and voicemail, and elsewhere. Martin apparently could not take it anymore, and took a personal leave of absence on Monday, October 28th from a football team trying to get into the playoffs. On Monday, November 4th, Incognito was suspended indefinitely from the team for detrimental conduct pending continued investigation of the inherent issues.

According to FOX Sports News and ESPN, Incognito sent texts that were “threatening and racially charged in nature,” and left the following voicemail to Martin in April:

On one side of this controversy are those who consider what happened to be typical locker room hazing among athletes, considering it “paying your dues” and a “rite of passage,” and how sometimes you just have to “man up.”  On the other side are those asserting that the explicit cruelty in this situation is beyond the pale. On SportsCenter, Chris Berman pointed out the transcendent nature of this regularly-surfacing problem by making parallels to the extent of bullying that victimized youth are experiencing around the country. He rhetorically asked if a grown man in the NFL has bent under repeatedly suffering under the severity and viciousness of bullying, how can we expect a second-grader to handle it?

While our Center primarily focuses on the experiences of adolescents, we are frequently contacted by adults who have been mistreated by others (co-workers, community members, extended family members, ex-romantic partners) and their stories are just as compelling. We do what we can to help them because we know that their lives and stories matter as much as our own, and because there are few things worse than the pain stemming from intentionally inflicted wounds by another person.

In this case, many elements stand out. It is astounding to see how racial hate was expressed with such callousness and perceived impunity. Victimizing someone because of their race could be considered a hate crime in many jurisdictions. We also have specific (and arguably credible?) threats made against Martin’s life (technically a criminal offense in every jurisdiction we know of). You can’t just mouth off and say whatever you want, regardless of whether you are joking, or upset, or frustrated, or angry. We raise our children to know this societal rule, and to respect it. We also know that “hurt people hurt people”; it has been reported that Incognito was picked on while in middle school, and was encouraged by his father to bully others back. He has struggled with anger management and substance abuse, and was named the NFL’s dirtiest player in a poll of fellow players – facts which do not trivialize what has happened but do provide some context.

This once again brings bullying into the limelight and forces us to confront cruelty and hate. As I continue to study this, a few points stand out that can help us respond to and prevent these incidents. Reflecting upon this situation, future Hall of Famer Baltimore Ravens linebacker Ray Lewis adamantly made clear that “there is a difference between hazing and hate.”  Everyone – adults and youth alike – need to understand on a visceral level what is and is not societally acceptable behavior. Some things should never, ever be said (and hopefully never even thought).

Second, Hall of Fame San Francisco 49ers quarterback Steve Young stated that “Great locker rooms self-police.”  We know from our work in schools that if members of that intimate community (educators, parents, and the students themselves) create a united front and take a stand against bullying, problems are greatly reduced or avoided. Finally, the Miami Dolphins’ front office has defended their decision to suspend Incognito as essential to maintaining a “culture of respect” among team members. I cannot overemphasize the critical importance of creating and preserving a positive social and emotional climate in ANY setting (e.g., school, corporation, football franchise). It is the linchpin that holds everything together.