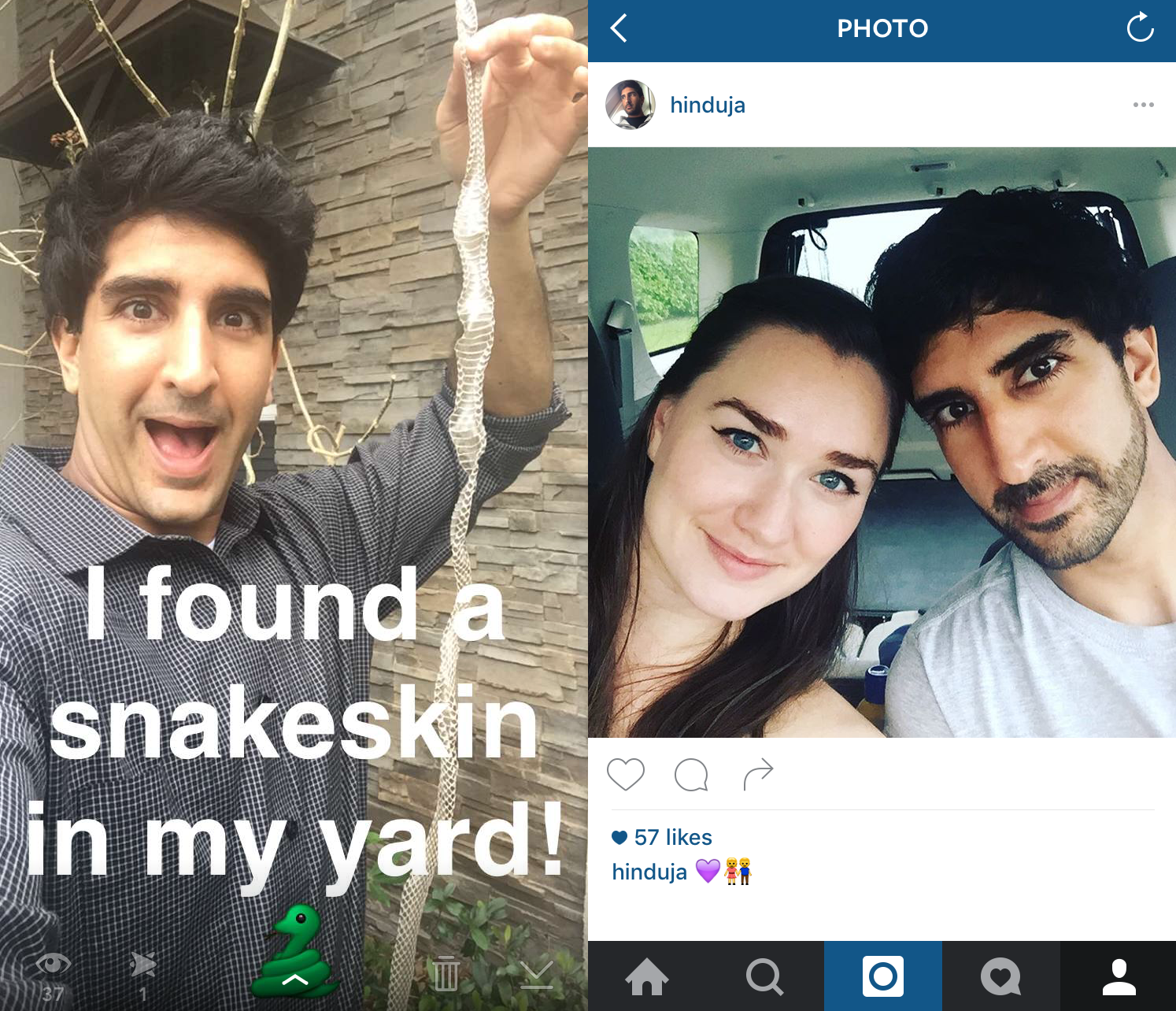 Parents are constantly asking me about their kids and their social media participation. Among other things, they want to know what app or site they should start their child on.  I could recommend some that are specifically designed for young eyes and ears, but those aren’t as popular as the ones that the mass of humanity have embraced.  If your child has a phone, it’s likely that they really want to be on Snapchat or Instagram. Those are by far the most popular right now, with Facebook and Twitter losing traction at least among adolescents. And if you had the choice to give your child access to one or the other – perhaps to get their proverbial feet wet with the whole “social media” experience – I strongly believe it should be….Snapchat. Here’s my reasoning:

It’s for messaging between individual friends

Pictures, videos, and chat messages (Snaps) on Snapchat are sent from you to your friends in a one-to-one capacity. That is, you create a piece of content you want to share, and then you have to individually select one or more of the people in your Friends list to directly send it to. If they want to respond, they do so directly to you with their own picture, video, or chat message. No one else – unless you’ve also specifically chosen to post it to your public Story – will see it (I don’t have room to cover how this works here, but I’ve already fleshed it out in detail in a previous blog). The point is that there is no “public” profile of yours for others to check out and “creep on” your life (as can be done on other sites and apps, including Instagram). There is no peanut gallery waiting to judge the content you upload through the giving or abstaining from “likes” and comments. There is no easy and acceptable way to share it with others either. And the person you chose to send it to probably isn’t going to screenshot it and use it against you, because again it is a conversation you initiated with someone you trusted enough to Snapchat with.

This greatly reduces the likelihood of various forms of cyberbullying and online harassment because your content isn’t out there for a large audience to see, rate, pick apart, and go off on – like on Instagram (or Facebook, or Twitter). The dominant means of communication is one-to-one and private (apart from the less-often used Story feature). Even if you have hundreds of Friends in your Snapchat contact list, you don’t send the same thing to a ton of people (and if you do, that is lame and annoying and everyone will wonder why you didn’t just post it to your Story for them to see at their convenience).

It is possible that you could choose to accept as a Friend someone you really don’t know, and directly send them a Snap that they might use against you – but most of our kids are smarter than we give them credit for. They typically don’t make that mistake, and instead intentionally communicate with those they know and trust on Snapchat. When I’m using the app, I typically am just living life, and I see or do something I want to share with one person specifically, and so I send them a Snap of it (often with a cute caption and emoji!). If I want to sort of “boast” about it and give all of my Friends the ability to see it, I will post it to my Story – and they can check it out if (and only if) they feel like it. But I’m super selective about that, and the Story feature is not the best part of Snapchat. Instead, it’s the individual messaging that can take place to share remarkable or unremarkable moments of my life. And that’s what makes it special and more personalized, because the recipient knows the Snap was just for them, and not sent out of some desire for validation and affirmation (likes, comments, shares, retweets, etc.) from the masses.

2. It preempts the posing and posturing we see on public profiles

The one-to-one messaging on Snapchat also protects kids from being caught up in the popularity contests we see on Instagram (and Facebook and other forms of social media), where so many are seemingly desperate for attention and affection tied to the pictures and videos they post. I mean, I’m an adult, and I definitely want people to like every single thing I post on Instagram, and that induces me to make sure that each post is as perfect as possible.

However, this has me taking seven selfies in different lighting and at different angles before I find the best one to upload. This has me using hashtags that are clever and funny and which ideally will lead to others discovering my account and following it. This has me hoping for new notifications from Instagram, and checking it every few minutes just to see if I have new likes or comments which will allay my fears that what I posted is not cool or attractive enough. And this has me checking how many followers I have, and doing whatever I can to get that number higher and higher. This is because I’ve fooled myself into thinking that the more followers I have, the more I am esteemed and liked and loved by others.

This is an awful way to live. And I’m so done with it. And I wouldn’t want my kids (or any kids, who are naturally impressionable and vulnerable during this stage) to grow up in an environment where their social media presence and visibility gives them their value, and imbues them with their worth. Heck no. Instead, I want their worth to come not from the perceptions and (unstable and wishy-washy) evaluations of their peers, but from who they are becoming as a person, and what their future is going to look like because of the character and skills they are developing. You can avoid so much of this on Snapchat, which is a huge plus. And if you talk to adolescents, they will tell you that this is one of the main reasons they love the app and are starting to tire even of Instagram.

3. You can’t search to see the content of others

There is no search functionality on Snapchat, like there is on Instagram (and Twitter, and Facebook, etc.). I love this. I can’t search for other people’s content. On Instagram, everyone is carefully creating and curating their pictures, and then uploading them and tagging them with hashtags for others to search for and find and view (obviously, to get more likes, comments, and visibility). In and of itself, that is not a problem. However, parents need to know that it is so easy to find extremely inappropriate pictures and videos on Instagram by using the Explore feature.

If you use the right hashtags or search for the right people on Instagram, you can discover a limitless supply of nudity, sexual positions, drug and alcohol use and abuse, and other pieces of very mature (and often offensive or even obscene) content. I don’t want that to freak you out, because your kid can do the same on Google or other search engines. All I am saying is that if I had a child who was just starting out with social media, I wouldn’tt want their curiosity to lead them to online content that contradicts the values I am trying to raise them with.

It is for these three main reasons that I highly recommend Snapchat over Instagram. As a parent, you may be thinking to yourself that Snapchat – with its disappearing messages – is going to promote sexting and the exchange of private, lurid content between youth that adults need to see and be “in the know” about. While we haven’t collected quantitative data on the ratio of appropriate, normal, prosocial, neutral content sent on Snapchat to that which is inappropriate, all of my extensive anecdotal research illustrates that pretty much everything kids are sending back and forth on the app is completely harmless, largely uninteresting, and quite random. Ask around, and I’m absolutely positive you’ll hear the same. Or, start Snapchatting with some of the kids you know, and see for yourself.

Snapchat, to me, is just more enjoyable than Instagram. I know there have been many times where I act completely silly and laugh until I cry because of picture and video filters (like changing your voice to sound like a chipmunk, or swapping your face with the person next to you) or anything else that Snapchat offers to users. I think I’m more myself on Snapchat than Instagram, the real me shows more clearly. I’m not afraid to act weird or silly and make a fool of myself, because I know who will see it. I only have friends on Snapchat that I have personally met. It’s fun, interactive, and you can be more involved with your friends’ lives as well as share the specific things that you want to. ~ Jennifer, Bristol, Virginia

All of this isn’t to say that bad things can’t happen on the app – I’ve covered this before and provided some safety strategies for you to implement to prevent them. But bad things can happen anywhere online or offline, and we have learned that technology is not the problem. Rather, it’s the decisions of some individuals who are using the technology. It’s up to you as a parent to help shape the thought processes behind those decisions. As such, I hope you find helpful this explanation of why Snapchat is the better social media option for a teen, especially when you consider their precarious position along the parabola of healthy youth development.

A final point: I encourage all parents (and educators!) to please take some time to become acquainted with the biggest social media apps out there right now, because otherwise you’ll tend to be more freaked out about that which you don’t know or understand. And I know this is just one more thing that you have to figure out and learn, but I think it’s worth it. I’ve spend time using them extensively, and it’s helped me to concretely guide youth about what they need to know (for example, see my advice related to Snapchat safety here and Instagram safety here). I’d love for you to be in the same position, because you have a platform to speak into the lives of kids under your care – just as I do.

Developing a Positive School Climate to Prevent Bullying and Cyberbullying