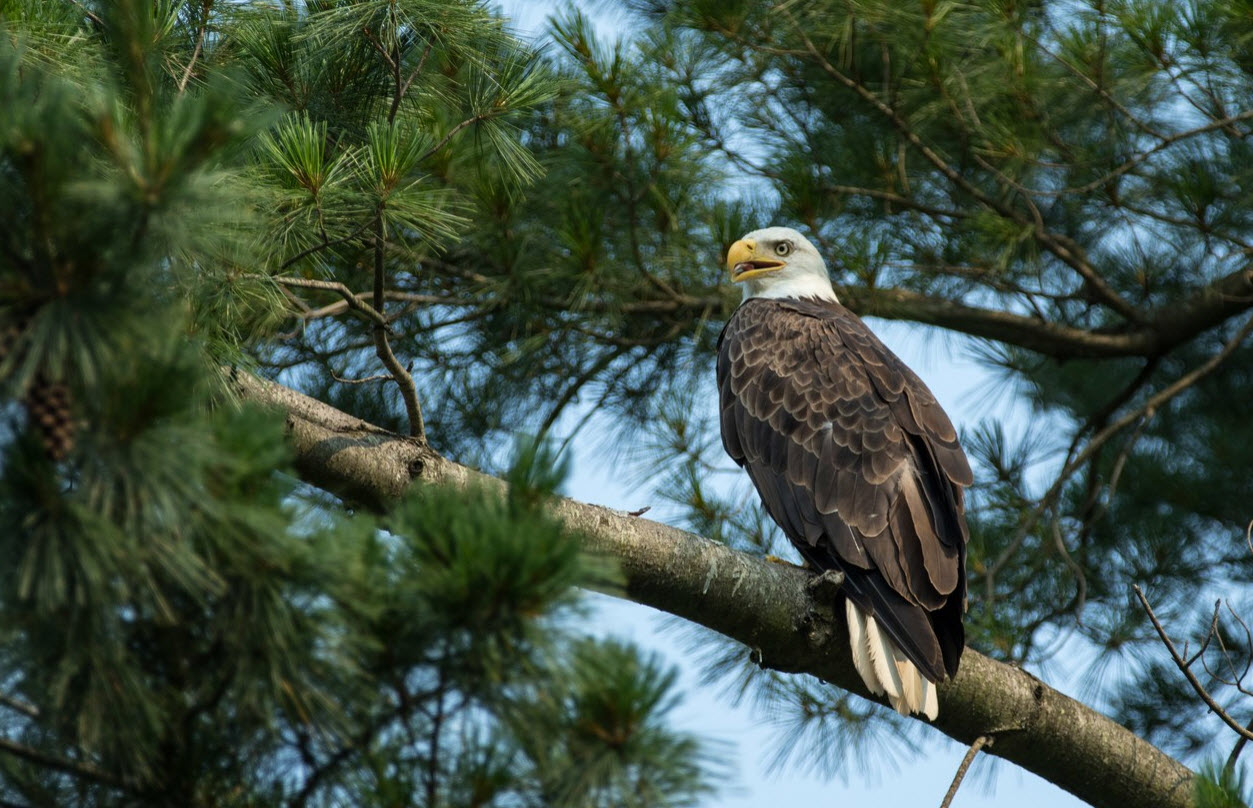 The other day I was exiting an academic building on my campus when I noticed a large bald eagle flying low above the lot where my truck was parked. Eagle sightings have become relatively routine in the last few years here in western Wisconsin, but I nevertheless always stop what I am doing to watch as they soar overhead. They are such majestic creatures.

As the eagle drew nearer I could see that there were two smaller, stark black birds divebombing it. Crows. They seemed to be pestering the eagle for no reason whatsoever. The eagle didn’t appear to be carrying any food or flying off with a crow chick, but just looked to be going about its business. And yet it was being hassled little-sister-like by two vexatious crows.

This isn’t the first time I’d witnessed aerial aggression perpetrated against America’s national bird by lesser aviators. This is a fairly frequent occurrence. Whenever I see it happening I always think to myself that the eagle could easily completely destroy the smaller birds if it really wanted to. A bald eagle stands about 3 feet tall, weighs in at 10 pounds or more on average, and has talons that are upwards of 2 inches long. Crows, on the other hand, are less than half the height, weigh about a pound, and have talons more like toenails than prey-killing implements. And while the eagles I’ve seen in this situation always appear annoyed, they never seem to react all that much. Is it because they can’t respond, or because they choose not to?

This most recent witnessing of hostility directed toward an eagle got me thinking about bullying. Even though there is some disagreement in the academic world about how to best define bullying, just about everyone agrees that in order for a behavior to be correctly classified as bullying there needs to exist a power differential between the aggressor and target. But what factors should be considered when evaluating who has power in a relationship? Certainly power could be manifested in physical, social, or other–more implicit ways (such as via demographic or socioeconomic factors). If I am physically bigger or stronger than you, I have the power to pick on you without worrying about being beaten up in return. If I am more popular than you, my friends will back me if there is conflict. Older students generally have more power than younger students. But these are not clear-cut, universal criteria.

When it comes to cyberbullying, technological proficiency could lend one power over another in online interactions. If I know how to anonymize my messages or mobilize legions of my social media followers to coordinate a sophisticated online attack that you are incapable of countering, that gives me the upper hand. Indeed, power can also be established through sheer numbers. Several physically weak or socially awkward students could have power over a popular or stronger student (there were two crows harassing the eagle, after all). In short, our considerations of power dynamics has certainly advanced beyond simple physical stature as being the only power that matters.

The concern for educators tasked with categorizing behaviors as bullying or not is how to determine if a power differential exists (or, more importantly from my perspective as a researcher, how we measure it in empirical research). Ultimately the best we can do is look at whether the target is capable of defending him or herself. We can ask students if they feel like they would be able to stop it if they wanted or just look to see if the behaviors continue after efforts by the target to put an end to it. If unwanted behaviors persist over time, then there almost certainly is a discrepancy in power.

As an aside, just today I saw a red-winged blackbird hassling a crow. In yet another parallel to the playground, the aggressor often becomes the target. We can’t forget that the ones who hurt others are sometimes the ones who are being hurt themselves. And different students (or species) take on different roles at different times and under different circumstances. Targets can become aggressors and aggressors can become targets – these are not perpetually distinct experiences.

I’m not sure how the eagle made out that day. Whether it was bullying, playful banter, or conflict that I observed, I’ll never know. He or she is likely doing just fine. I think it is easy for us to assume the same about students who seem to have it all together. While I can’t stop to ask the eagle if everything is okay, or take the crows and red-winged blackbirds aside to read them the riot act regarding how they are treating their flying comrades, we certainly can occasionally check in with our children and students to make sure there aren’t any covert problems going on. And, of course, work to empower them with tools and strategies to utilize when they find themselves on the receiving end of hurtful comments and behavior.