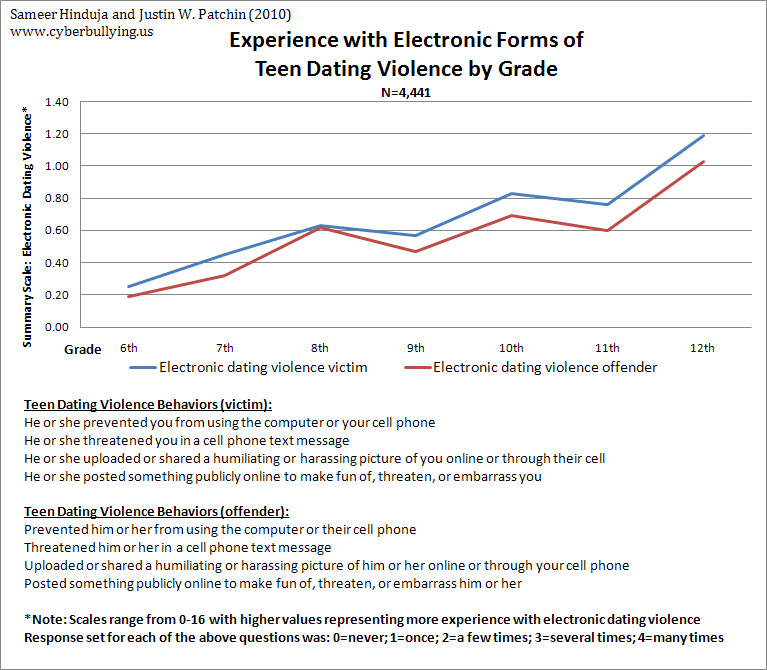 We have recently shared that electronic dating violence among teenagers is one of the facets of adolescent technology misuse we are exploring. Please see the previous referenced blog for foundational information. Today, I wanted to share with you our research results from our 2010 data. This is based on a random sample of approximately 4,400 11-18 year-old youth from a large school district in the southern United States. The demographic characteristics of the sample were statistically representative of the entire population of middle school and high school students in this district. If you would like further information about methodology, please let me know.

• 10% of youth said a romantic partner has prevented them from using a computer or cell phone.

• 6% of boys and girls say their romantic partner posted something publicly online to make fun of, threaten, or embarrass them.

• 10.4% of boys and 9.8% of girls said they received a threatening cell phone message from their romantic partner.

• 5.4% of boys and 3.4% of girls said their romantic partner uploaded or shared a humiliating of harassing picture of them online or through their cell phone

• 7% of youth admitted that they prevented their romantic partner from using a computer or cell phone.

• 6% of boys and 4% of girls say they posted something publicly online to make fun of, threaten, or embarrass their romantic partner.

• About 7% of youth said they sent a threatening cell phone message to their romantic partner.

• Victims of traditional (offline) dating violence are significantly more likely to be victims of electronic forms of dating violence (r=.75) than those who have not experienced offline bullying

• Youth who are cyberbullied are 3.6 times as likely to experience electronic teen dating violence

We will share more about these findings and their implications in the immediate future.