As regular followers of this blog know, Sameer and I recently collected data from over 5,500 middle and high school students from across the United States. We asked 12 to 17 year-olds to tell us about their experiences with a variety of online problems, including sexting. I thought it would be useful to share some noteworthy initial findings.

Overall, 12% of students we surveyed said they had sent an explicit image of themselves to another person at some point in their lifetime. About 4% said they had done it within the last month. Similarly, about 19% said they had received a sexually explicit image from someone else at some point in their lifetime (about 6% within the last month). These numbers are much lower than some media reports (which tend to sensationalize the issue), but in line with other more rigorous national research. While there hasn’t been many recent studies exploring teen sexting, it doesn’t appear that these behaviors have increased dramatically over the last few years.

Boys were significantly more likely to send and receive sexts. This is a bit different from our previous sexting study (completed in 2010) which found that boys were significantly more likely to receive a sext but boys and girls were equally as likely to send one. It’s also different from the usual media narrative which seems to suggest sexting is primarily a girl problem. 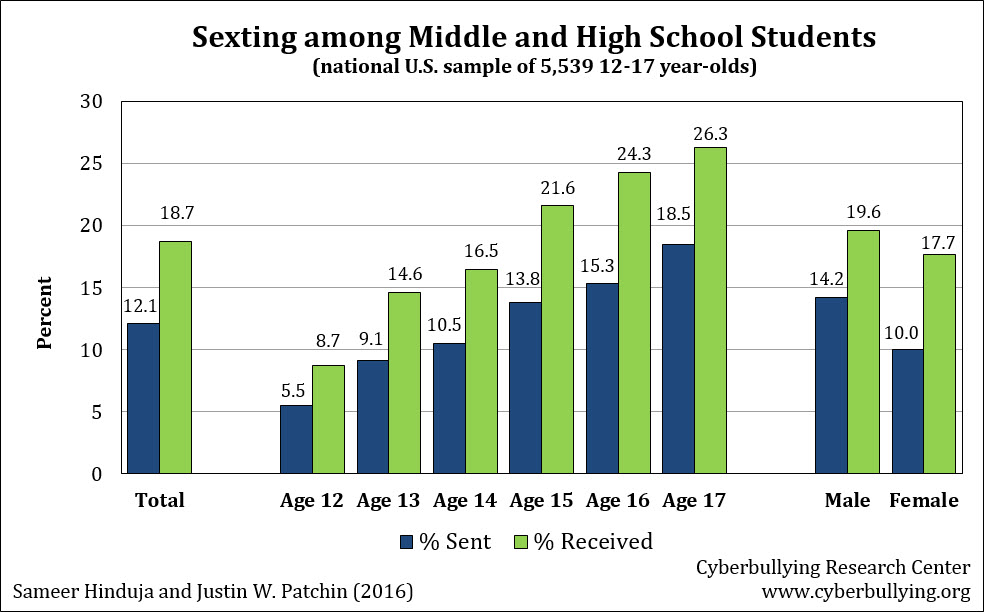 Interestingly, 24% of the seventeen year-olds surveyed told us that they have had sexual intercourse. So more students are having sex than are engaging in sexting. And while sexting and sex are related, there isn’t complete overlap in these behaviors. Focusing again just on seventeen year-olds, nearly 70% had neither had sex nor sent a sext (ever). Among those who had done either, only a little over a third (37%) had done both (41% had sex only and 22% had sent a sext only). More research is necessary to better understand how motivations for sexting and having sex differ.

[dt_quote type=”blockquote” font_size=”big” animation=”none” background=”plain”]More students are having sex than are engaging in sexting.[/dt_quote]
It’s important to acknowledge that how one defines “sexting” determines how many students have done it. Last year I attended an academic conference where a young researcher claimed that over two-thirds of students had received a sext. After the presentation, I asked the researcher how sexting was defined in the study. She told me they asked students if they had “ever received a nude or semi-nude image of someone electronically.” This would include sexting, yes, but also photos of scantily clad celebrities or any generic pornographic picture found online. I’m not surprised the number was very high. When we inquire about sexting, we tell students that sexting is when “someone takes a naked or semi-naked (explicit) picture or video of themselves, usually using their phone, and sends it to someone else.” We then ask to whom they sent these images and from whom they received them. The numbers above include only those images sent or received between romantic partners or interests.

We’ll continue to post more results from this study throughout the next several months. For example, we also collected data on situations where students were coerced into sending explicit images or were threatened because of explicit images already sent. This problem of “sextortion” really hasn’t been empirically explored, and we are excited to see what our preliminary data show.

We want to thank the Digital Trust Foundation for providing a grant to support this work.