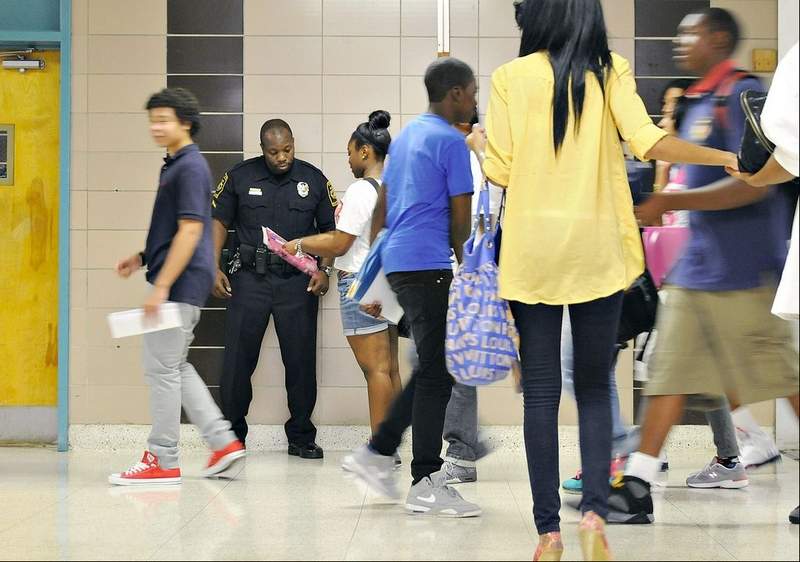 Last week I posted about a situation where a student was suspended for his involvement in a fight in which video evidence showed that he did not participate in a way that warranted the punishment. In fact, from all available evidence, he did exactly the right thing to do: he walked away. Another aspect of that case that generated public scorn was the reported unprofessional treatment that the student received from the police officer assigned to the school. The student was evidently told by the officer that he should “bulk up” as a way to avoid being pushed around in the future. This got me to thinking a bit about the role of law enforcement officers in the schools.

Recent data are hard to come by, but thousands of officers work in schools every day across the United States. They are mostly responsible for the safety and security of the students, staff, and visitors, but often are utilized in a variety of other roles – some of which they are inadequately prepared for. For example, school-based law enforcement officers are occasionally called upon to provide instruction in the classroom (especially using pre-packaged drug or violence prevention curricula) yet they rarely receive formal training on how to teach effectively. Moreover, officers are regularly brought in to investigate or even mediate peer conflict, yet many are not well-trained in dealing with bullying incidents (or even in working with kids generally). Over eighty percent of the school-based officers we surveyed back in 2010 said that they needed more training on how to deal with cyberbullying. So what can cops contribute to the well-being of students and staff at school?

Schools that have a dedicated school resource officer (SRO) assigned to their building are at an advantage when it comes to dealing with student issues that may implicate law enforcement. These officers generally have more training and experience in dealing with students and schools and their unique issues than their counterparts assigned to traditional patrol functions. Since SROs are in the schools on a continual basis, they are usually more attuned to student interpersonal relationships and the concerns of educators. The best officers know the students personally, and interact with them in a relatable way. As a result, students come to respect the police and better understand that they do more than, say, show up at their house when there is a domestic disturbance or issue them a citation for driving 5 miles-per-hour over the speed limit.

Unfortunately, this model has been disappearing in many schools across the country as both school and municipal budgets have contracted. Historically, SROs were often funded through a combination of money from schools and cities or counties, but when one partner pulls the financial plug, the other rarely has the resources to make up the difference and the position is usually lost. As a result, police are often called to the school only in situations where a significant (and possibly criminal) incident has occurred. Sometimes it is the same officer that responds throughout the school year, but often the call will be directed to whoever is on duty and in the area at the time. Having a consistent contact is important from a procedural standpoint (making sure the officer is aware of the issues related to schools and students), but it also helps to have a familiar face – both from the perspective of the staff and students.

When it comes to responding to bullying (or any incident, really), school administrators and law enforcement officers play different yet complementing roles. Usually law enforcement is only pulled into the discussion when an incident appears to rise to the level of a violation of criminal law. Assaults or serious substantiated threats of violence would be the most common examples where the police should be brought in. Law enforcement can also assist in investigating incidents. They often have more training in interviewing and evidence collection, and would be able to evaluate the evidence to determine if a crime has been committed.  That said, schools should be careful when including law enforcement officers in an interview because it changes the dynamic considerably. Having an officer stand over the shoulder of the principal while he or she is asking the student about school behaviors is intimidating under any circumstance, but especially so if the officer is not one who is regularly seen in the school.

Technically speaking, when an administrator is investigating an incident, they are doing so as a representative of the school, for possible school discipline. If the police are involved (whether it is a SRO or other officer), the investigation may become one where the focus is on uncovering evidence of a crime for possible criminal punishment. When that happens, the procedural rules change. For instance, when a school official is interviewing a student or searching his or her property, they typically only need a reasonable belief that the student has engaged in, or possesses evidence of, a behavior that violates school policy. Very few constitutional protections are afforded to students in these cases because the school is acting in loco parentis (in place of parents) and not as a government official for the purpose of formal punishment. When the police are involved in investigating a crime, citizens (including minors) do have certain rights.

In Miranda v. Arizona (1966), the U.S. Supreme Court ruled that, prior to “custodial interrogations,” law enforcement officers must inform individuals who are suspected of committing a crime that they have specific rights. We’ve all heard this statement before on crime shows: “You have the right to remain silent, anything you say can be used against you in a court of law…You have the right to an attorney…If you can’t afford one, one will be provided…” etc. This standard also generally applies when officers are interviewing minors in the community, but the question was recently raised in the Kentucky Supreme Court about whether students should be informed of their rights when being questioned by an officer at school, or by a school administrator in the presence of an officer (see also J.D.B. v North Carolina).

The Kentucky Supreme Court re-affirmed the ability of school officials to interview students for the purpose of a possible school sanction without being required to inform them of their rights, but ruled that in circumstances where a police officer is involved and criminal charges are possible, Miranda warnings are required. This deviates from some previous interpretations which basically held that if a law enforcement officer was assisting in a school investigation, the officer was beholden to the rules that applied to school officials. No doubt this issue is headed to the U.S. Supreme Court for clarification.

I have also previously written quite a bit on the different issues associated with whether an educator or a law enforcement officer can search the contents of a student cell phone. New Jersey v. T.L.O. (1985) states that students are protected by the Fourth Amendment to the U.S. Constitution which protects citizens from unreasonable searches and seizures by government officials. In T.L.O., the Supreme Court also made it clear that the standard that law enforcement officers must reach to conduct a search (probable cause that a crime has been committed), is not required of educators. The standard applied to school officials is whether the search is “justified at its inception and reasonable in scope.” Of course there is a bit of subjectivity to this standard and what appears to be reasonable for one person may not be for another. In T.L.O., the Court ruled that for a search of student property to be justified, there must exist: “reasonable grounds for believing that the search will turn up evidence that the student has violated or is violating either the law or the rules of the school.”

These are just some of the issues, and as you can probably tell, many of the important questions have not been fully settled. Overall, officers and educators need to use their judgment about situations that might benefit from, or necessitate, law enforcement involvement. As long as there is no immediate threat of harm, it is usually best for school administrators to interview students involved in misbehavior without a law enforcement officer present. Under these circumstances they have a lot more freedom and leeway to gather the necessary information. As soon as the administrator reaches the conclusion that a crime may have been committed, he or she should turn the investigation over to the police. It is recommended that administrators have open lines of communication with local law enforcement officers (and especially SROs) so that both can respond quickly and effectively when confronted with a problem.

A well-trained and experienced SRO will be an asset in any school, and most administrators would (or at least should) welcome them with open arms. I have seen many amazing SROs work their magic in schools – improving safety and crisis response efforts, yes, but also by enhancing police-community relations and improving the overall culture of the school and broader community. The evidence concerning the effectiveness of SROs varies considerably (see this and this and this, for examples), which isn’t surprising given the diversity of personalities employed in these positions, and the varying ways in which SROs are utilized in schools. As is frequently the case, the conclusion I reach is that more solid research is necessary.

As a criminologist who teaches future cops, I know that the majority of law enforcement officers would approach any assignment with integrity and professionalism. Some are cut out to work in schools, while others are not. The duds need to be pulled out because they are doing more harm than good. From the available evidence, the officer in the video referenced above isn’t a good fit for a school and should be reassigned. If administrators and SROs work together for the common purpose of helping students (along with parents, of course), then great things can happen. There are a lot of ways this can fail, but usually it doesn’t. The high profile anomalies will end up on the nightly news, on YouTube, or in a courtroom. But we shouldn’t base our opinions on these worst cases and instead focus on what can be done to improve the response efforts of all involved.

If you are interested in a more detailed discussion of the issues, check out chapter 10 of our book “Cyberbullying Prevention and Response: Expert Perspectives” which covers “School Law Enforcement and Cyberbullying.”