We all have them: Facebook friends who post something annoying, inappropriate, inaccurate, or upsetting. It could just be accidentally misspelled words or misused vocabulary. Or debating whether slaves helped to build the White House. Or it could be something much worse.

Sometimes these posts stem from carelessness, naiveté, or ignorance. Other times they are clear and intentional messages of hate. What do you do? I suppose to some extent it depends on the nature of the relationship (and what exactly was posted). If it’s a close friend, we might mention it next time we see them in real life. If it is someone we met only once (or know only from online interactions), we might unfriend them. But what about friends, coworkers, or relatives that we want to remain connected with?

When it comes to certain forms of irritating content, sometimes we just need to have a bit of patience. For instance, those repeated spelling errors or misapplications of “to, too, and two” can drive me mad. But I make those mistakes too (see, got it correct right there), usually when trying to post in a hurry from my phone while doing three other things. When you see something like this: just ignore it. Scroll past. Don’t make a big deal out of it. Likewise, if you have a friend who posts the occasional off-color comment or uncouth meme, ignore it. Don’t call attention to it or encourage it. Just keep scrolling.

Facebook already has spellcheck seamlessly built into their platform, which surely cuts down on some language-related problems. Other issues are more challenging to automatically regulate. I’ve long lobbied them to incorporate a “snopescheck” feature to instantly fact-check suspicious “truths.” And as someone who has spent a career trying to curb cyberbullying, an automatic “cruelcheck” feature would also be nice (pun intended). As adults, you’d think we would have all the emotional and technological tools necessary to post only those comments that are true and positive. And yet we’ve all seen cringe-worthy comments from some social media connections that we just can’t ignore. One option might be to “unfollow” the people who post them.

What it Means to Unfollow

One of my current Facebook friends (and fellow Michigan State grad!) Matt got me thinking about this a few days ago when I saw his post:

Oh unfollow. Thank you. You are the beautiful alternative to the intellectual thrashing that I want to give some of my facebook friends when they post ignorant shit but think they are enlightened. Unfollow…

My initial instinct was to “like” his comment because I agreed with it. Though I’ve never personally unfollowed anyone, it can be a useful tool in some circumstances. It enables you to stay friends (or at least to stay connected on Facebook), but not see what the person posts. The more I thought about it, though, the more I started to question the practice (please don’t unfollow me Matt!). “Unfollowing” someone simply means you will not see their status updates and comments in your Newsfeed. You are not cutting ties with them. You can still receive direct (inbox) messages. From their perspective, nothing has changed about your online relationship. They don’t know that you are no longer following what they post.

It might make sense to utilize the unfollow option if you have friends who frequently post mundanity that you are just tired of seeing. I mean, who really cares if your third cousin ate at Red Lobster for the fourth time this week. Or if your high school classmate is listening to Adele on Spotify. By and large, these are good people who just have a bit of an oversharing problem. But the hourly updates of a few can completely clutter our feed to the point where we don’t even want to look anymore.

Likewise, I admit that there might be some pressure to accept a friend request from that distant acquaintance or new coworker (or boss!) and you have no real interest in their posts. Unfollow could be an option. You need to remember, however, that when you unfollow someone, that person can still see your posts. Just because you unfollow your boss doesn’t mean she can’t see your “I hate my boss” memes (though there are other steps you can take on Facebook to limit who sees what content you post).

Unfollowing someone for the above reasons, though, may be unnecessary. For better and worse, Facebook is paying attention to what you are clicking on when using their site. It knows who you spend the most time interacting with. Its algorithms then adjust which content you see, and from whom, based on past practices. To help it learn more quickly, click on stuff you like and ignore the stuff you don’t. In time, you’ll see more in your feed from people whose posts you routinely interact with and fewer from those you don’t. So in theory at least, you shouldn’t need to unfollow people you don’t normally interact with.

When “Ignore” and “Unfollow” Isn’t Enough

If you have genuine concerns about what someone is posting, just ignoring or unfollowing them lets them off the hook. Or worse: they could get the impression that you agree with them. Silence is tacit approval. If someone repeatedly posts racist, misogynistic, or downright cruel commentary about others, bounce them. Kick them loose. Unfriend them. You can still be friends with them in the “real world” (if you really want to be associated with the kind of folks who would post that kind of stuff). But like it or not, who we follow online is a reflection of our own values. I choose to stay friends with people who disagree with me or make the occasional spelling mistake, but I refuse to align with anyone who spouts hatred and hypocrisy.

It’s also likely that if someone doesn’t speak up to respectfully-but firmly-admonish truly bad behavior, it will continue – and others (especially those targeted) may internalize those messages and feel less comfortable in that digital space. Many times we pursue peace at all costs, and implicitly condone inappropriate words and actions from people in our social circle simply because we don’t want to ruffle feathers. At its root, inaction conveys a lack of conviction and unwillingness to stand up for what is right and stand against what is wrong.

So my advice is to unceremoniously unfriend anyone who acts in a way that is inconsistent with your values. You don’t need to make a big (public) spectacle about it. If you are so inclined, you can send a private message to the person letting them know why you are disconnecting from them. Doing so publicly just creates additional unnecessary drama. Unfriending isn’t easy to do, but it is the right thing to do in certain situations. 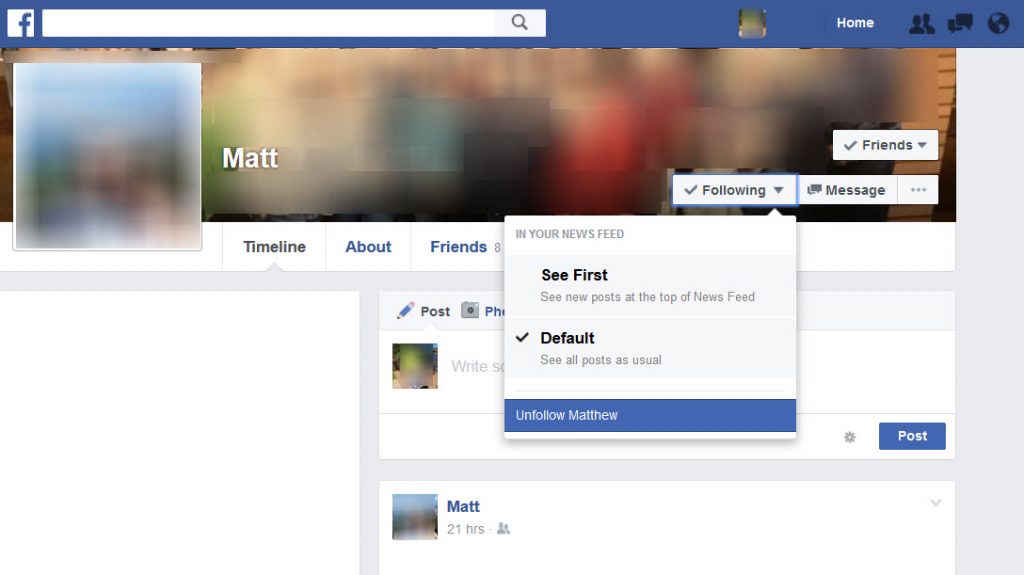 Other Implications of Unfollow

I personally don’t think we should block or unfollow all of those with whom we disagree. It isn’t healthy to live in a bubble surrounded by only those who think exactly like us. We should instead seek to understand the viewpoints of others (if for no better reason than to more carefully consider our own perspectives).

I have a variety of Facebook friends with differing beliefs on a lot of controversial issues, including friends and relatives on both ends of the political spectrum (though most, like me, hover somewhere around center and thoughtfully consider each individual issue – irrespective of hyperbole). I do shake my head sometimes at what I see, but usually resist a retort unless something posted is egregiously incorrect or outright hurtful. And while I’ve been on Facebook for more than a decade, I can’t think of a single example where something I posted changed the political opinion of someone else. Social media simply isn’t the space for changing hearts and minds.

It also helps that I have heated disagreements with smart people who I genuinely like and respect. As such, I cannot simply dismiss them as uninformed idiots. As adults, we have an obligation to model appropriate discourse online. Even with—no, especially with—people with whom we disagree. Our kids are watching. This is an opportunity to show them how to discuss difficult and even contentious issues civilly.

So if you see something annoying, ignore it. If someone posts something that is inaccurate, correct them (preferably in private). But if you regularly see malicious or offensive posts from a particular person, however, it’s time to sever the social media relationship. Yes, we have the right to say just about anything we want in the United States. Just because we can say it, doesn’t mean we should. And it also doesn’t mean I have to be your friend on Facebook.