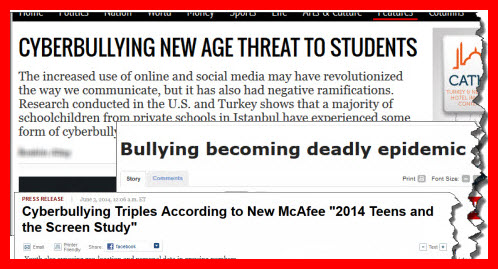 University of New Hampshire sociology professor David Finkelhor recently wrote a short, but thought-provoking, commentary that questions the motives of journalists and scholars in their efforts to explain the nature and extent of risks associated with teen technology use. The impetus for this invited-editorial was an article written by Sonia Livingstone and Peter Smith published in the same journal, which reviews available research on the harms experienced by children who use the Internet. I agree with professor Finkelhor that much of the hype concerning possible online risks have been overstated in the media, but I am not sure if he is correct to include many academics in the same camp.

My primary perturbation is with this point in particular: “The alarmism reflected by so much of the scholarly and journalistic literature appears to make several assumptions that are worthy of more explicit discussion.” (p. 655, emphasis added). Is it really accurate to suggest that “so much” of the scholarly literature is tainted by invalid data and inappropriate interpretations? And what would drive such a practice?

It is true that too often we see headlines purporting one extreme view or another. These ‘alarmist’ headlines are the ones of which professor Finkelhor is most critical. And in that, we agree. Of course that is not by coincidence: extreme headlines get the attention, the pageviews, and the clickthroughs. If you believe what you read online, cyberbullying is either occurring at “epidemic” levels or is a “low-frequency” problem. But is reality really so strongly slanted one way or another? And furthermore, does cyberbullying have to occur at epidemic levels (whatever that means) for it to warrant our attention?

It is difficult for me to comment on the accuracy of headlines most frequently appearing in mass media publications since I have not done a careful content analysis of these sources. Anecdotally, I can sympathize with professor Finkelhor’s synopsis that many buzzworthy headlines cannot be supported by research. I can, however, speak to the state of the academic literature on cyberbullying specifically.

Our comprehensive review of as much of the cyberbullying scholarship as we could get our hands on shows that it is neither a rare event nor something all teens are forced to deal with on a daily basis. Specifically, we have now looked at 74 articles published in peer-reviewed academic journals. Fifty-two of those included cyberbullying victimization rates and 43 included cyberbullying offending rates. Rates across all of the studies ranged widely, from 2.3% to 72% for victimization and from 1.2% to 44.1% for offending. The average across all of these studies was remarkably similar to the rates that we found in our work (about 21% of teens have been cyberbullied and about 15% admitted to cyberbullying others at some point in their lifetimes). The quality of the methodologies employed by each of the studies examined differs widely, but even when we restricted our analysis to only those studies that used random samples (26), the numbers did not change much at all (21.5% were victims, 17.3% were offenders).

While there are numbers at the extreme ends of the spectrum, the majority of the victimization prevalence rates cluster between about 15% and 30%. These aren’t the kind of numbers that will attract much attention by fear-mongering journalists or reactionary politicians and lawmakers. It’s certainly not good that one out of every 4 or 5 teens has experienced cyberbullying, but that is a far cry from a recent assertion that cyberbullying has “tripled” based on a poll that found that more teens report having witnessed cyberbullying this year compared to last.

To clarify, professor Finkelhor is not focusing his attention on the validity of portrayed prevalence rates per se, but offers a more general critique, perhaps, of implications offered as a result of research. It is one thing to report that 20-25% of teens have experienced cyberbullying (this is evidence-based). It is quite another to extend from this finding that technology is the cause of most peer-harassment (it is most definitely not), or that its solution rests in technology-centric solutions (this is pure conjecture).

Along those same lines, saying that someone is at risk for being cyberbullied is much different than saying there are risks associated with being cyberbullied. Of course both statements are true, but there is very little that we really know about the nature, extent, and seriousness of the consequences that result from being cyberbullied. Indeed, Livingstone and Smith’s review came to the same conclusion:

“Risks of cyberbullying, contact with strangers, sexual messaging (‘sexting’) and pornography generally affect fewer than one in five adolescents. Prevalence estimates vary according to definition and measurement, but do not appear to be rising substantially with increasing access to mobile and online technologies, possibly because these technologies pose no additional risk to offline behaviour, or because any risks are offset by a commensurate growth in safety awareness and initiatives” (p. 635).

We have a pretty good handle on about how many youth experience various “harms” (like cyberbullying) but know very little about what the consequences of such experiences are. More research is necessary.

If Not This, Then It Must Be This

Some people tend to take the tack that if one extreme interpretation is not supported by evidence, then the other, opposite interpretation, must be true by default. As an example of this, much has been written in an effort to debunk the apparent myth that “bullying causes suicide.” Does bullying cause suicide? Well, to be honest, we really don’t know. Here’s what we do know: The vast majority of youth who experience bullying or cyberbullying do not commit suicide. But some do. Just because there isn’t any solid evidence to empirically confirm the suicide-bullying link, doesn’t mean that a relationship does not exist (see my earlier post on this here).

The logical conclusion based on everything that we do know is that bullying likely does cause some kids to commit suicide. The key question for me is not whether bullying does or doesn’t cause suicide. I’m more interested in learning about the unique life experiences and circumstances (bullying included) that push children in the direction to consider ending their lives. I’m not focused so much on challenging (or proving) one position or the other.

Professor Finkelhor points out that “The mere possibility of plausible deviance amplifying mechanisms does not necessarily mean that the internet is amplifying deviance.” (p. 656). Indeed, and the fact that they have not been uncovered empirically also does not mean that they don’t exist.

Here again, though, I suspect that the truth is somewhere in between these diametrically-opposed positions. Technology can expose some kids to increased risks of certain harms. Technology does create a new set of characteristics that largely didn’t exist in the same way previously (anonymity, disinhibition, virality, permanence, to name a few). Internet education can be useful in teaching some important lessons.

As an illustration, it is without debate that driving a car (or even just riding in one), dramatically increases one’s risk for being in a fatal car accident. According to the U.S. Centers for Disease Control and Prevention, seven teens die every single day in car wrecks. This is a very real risk. And yet, we still teach our children how to drive. And some important lessons can be taught even when not inside a car to help make them better drivers (there is a classroom component to driver’s education, and parents can work to instill in their children respect, anger-management, self-control, and respect for the law). But eventually, these lessons need to be applied when behind the wheel. And positive behaviors need to be reinforced and problems are best addressed while in that environment.

The same is true with technology. We can and should teach our children empathy, social-emotional skills, conflict resolution, and mutual respect in whatever context they are in. But we should also work with them to apply those principles in various online environments.

Journalists from within the mass media realm are driven by the desire to be seen, to be read, and to be heard. They (and their bosses) want their piece to “go viral” and that objective pressures them into using the most eye-catching headline, often supported—if supported—by the most extreme (and random) statistic that can be found. To hell with the validity or reliability of findings across multiple rigorous studies, if it can somehow support a sensationalistic claim.

Professor Finkelhor is right when he suggests that in some ways, some scholars are in the same boat. They are constantly trying to land that next grant or prestigious journal publication, just like journalists who are pursuing the most comments, clickthroughs, and pageviews for their pieces. But I would argue that the peer-review process in academia works to remove the most egregious exaggerations or misinterpretations. And, at the very least, any decent scholarly article should include a detailed description of the methods employed so that the reader can draw his or her own conclusions based on what was done. This is severely lacking in popular press media writing (though not completely absent). I feel that the bottom line in all of this is that journalists—and especially scholars—have an obligation to express their thoughts in a way that does not move beyond the evidence. Sure, they can take a stand, but they best base that position on solid, consistent evidence.

Our friend Anne Collier, editor over at NetFamilyNews.org, also offered her always-insightful perspective on professor Finkelhor’s article. You can read her thoughts here.