The “Trump Effect” on Adolescent Bullying Behaviors at School

American presidential hopeful Hillary Clinton recently remarked that: “Parents and teachers are already worrying about what they call the ‘Trump Effect.’ They report that bullying and harassment are on the rise in our schools, especially targeting students of color, Muslims and immigrants.” (August 25th, 2016, Reno, NV)

But is this accurate? It came out of a politician’s mouth, so I think we’re right to be skeptical.

Politifact (the nonpartisan fact-checking website) rated the statement as “mostly true.” They referred to a report by the Southern Poverty Law Center which surveyed approximately 2,000 self-identified K-12 educators who visited the Teaching Tolerance website (or who subscribed to its newsletter) between March 23 and April 2, 2016. This admittedly non-representative sample noted a recent perceived increase in “bullying, harassment and intimidation of students whose races, religions or nationalities have been the verbal targets of candidates on the campaign trail.” While the survey did not inquire about particular candidates, 20% of respondents specifically mentioned Donald Trump, while fewer than 4% mentioned any of the other candidates (combined). This purported “Trump Effect” has come up in discussions with my colleagues who have noted more online animosity and social discord occurring alongside the rise in popularity of this very public figure (consistent with the SLPC report). Whether it is coincidental or just that we are noticing it more, something seems to be going on.

It is impossible using currently available data to directly and definitively evaluate the claim that Mr. Trump’s rhetoric has led to more bullying among students at school, but we can look at whether bullying in general, or bullying specifically based on race or color, has increased.

As Politifact noted, there aren’t a lot of good nationally-representative, long-term data sources that we can use to evaluate Mrs. Clinton’s statement. But we can look at what is available. For example, the Centers for Disease Control and Prevention conducts a biennial survey of students across the U.S. in their Youth Risk Behavior Surveillance (YRBS). This survey has long asked about bullying at school, so we can look at patterns across many years. In 2015 (the most recent year available), 20.2% of students reported that they were bullied at school in the previous 12 months, compared to 19.6% in 2013, 20.1% in 2011, and 19.9% in 2009. So, according to this study, the percent of students who have been bullied at school has remained relatively stable the last several years (around 20%).

This consistent trend is also found when reviewing data from the School Crime Supplement of the National Crime Victimization Survey, which also asks students every other year about victimization experiences at school. Unfortunately, the most recent year of data collection (2015) has not yet been released to the public. Overall student experience with bullying remained more or less constant (at about 28% between 2005 and 2011), until 2013 which showed a drop to 21.8%. We don’t want to draw any conclusions from a single disparate data point (especially since the YRBS didn’t reveal a similar blip), so we’ll have to wait for the 2015 data to see if there is any sustained decline in bullying victimization according to this survey.

These are just two national studies representing a general measure of experience with all types of bullying (not specific to bullying based on race). And neither has collected data in the last year or so (the time period we are most interested in, when Mr. Trump has been most in the spotlight). Sameer and I do have some very recent data, however, that could provide some insight into this question.

Race-based Bullying May Be Increasing

This summer, specifically in July and early August, we’ve been collecting data from a nationally-representative sample of over 4,000 middle and high school students. The purpose of the study, funded by the Digital Trust Foundation, is to better understand the correlates and consequences of bullying and cyberbullying among youth, with a particular focus on digital forms of teen dating violence. We just completed data collection last week and are still in the process of reviewing and “cleaning” the dataset, but since the information is so current, we thought we would release some preliminary results that might be relevant to this discussion. 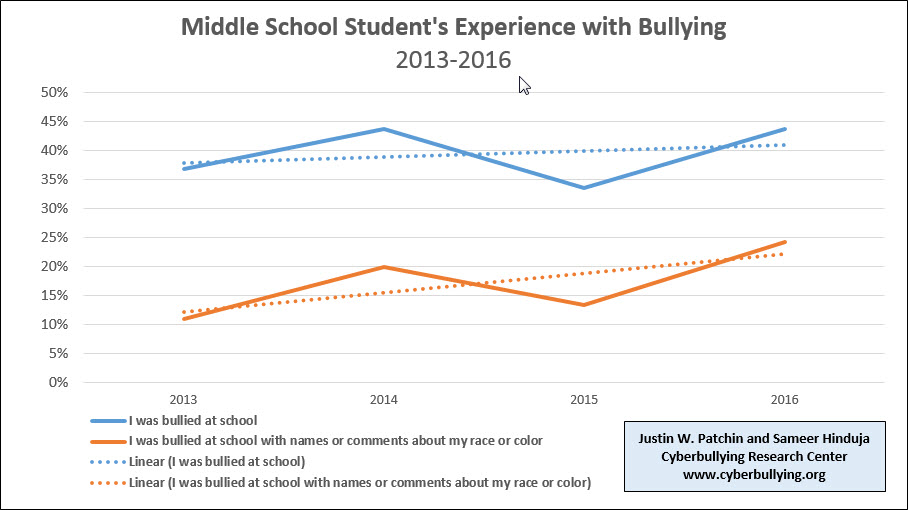 About 44% of the approximately 1,500 middle school students surveyed reported that they had been bullied at school. 24% said they had been bullied because of their race or color. Compared to other studies we have done in the last 5 years, the rate of bullying overall was pretty much the same (range 37%-44%, average 39%), but the rate of bullying based on race or color was the highest it’s been during that period (range 11%-24%, average 17%).

I should point out that these four studies all represent different populations (that is, different school districts in different regions of the United States). Only the most recent sample is nationally-representative. As such, comparing them like this is tenuous at best. Nevertheless, it provides some initial data to assess whether recent political events are correlated with a rise in bullying behaviors among students at school (especially bullying based on race or color). To summarize, there is no clear trend that bullying overall has increased in the last 5 years, but bullying based on race and color may be occurring with greater frequency in recent months. More nationally-representative data collected over a longer period of time would be needed to better understand what is really going on.

When asked about Mrs. Clinton’s comments, our friend (and expert on all things related to research on bullying) Dr. Dorothy Espelage told Politifact that “the data are not there to support the statement from a scientific-evidence-based perspective.” Despite the data provided here (or maybe because of it), we agree with her assessment. Our data provides some limited evidence of something going on in the last few months, but is not precise enough to conclude one way or another if the “Trump Effect” is impacting bullying experiences at school. Whether it is or not, the political rancor prominently portrayed on television and online provides an opportunity for parents and educators to teach appropriate discourse. Our kids are paying close attention: they see our Facebook posts and overhear our conversations with friends. Hopefully what they see and hear is respectful and kind, even if the subject of the conversation is someone with whom we vehemently disagree.

Parents should take the time to point out to their children when a politician or public figure (or anyone else, for that matter) crosses the line from civil and courteous communication to callousness, crassness, or cruelty. If we don’t call it out when we see it and label it as offensive, unprofessional, and inappropriate, our kids will think we condone it. They may come to learn that it’s just how adults should interact with others when they want to make a point. While we can’t serve as gatekeepers of everything our children take in, we can play a more active role in helping them filter out the wrong behavioral models, and be exposed to–and emulate–the right ones.