New Book Review of “Bullying Beyond the Schoolyard” 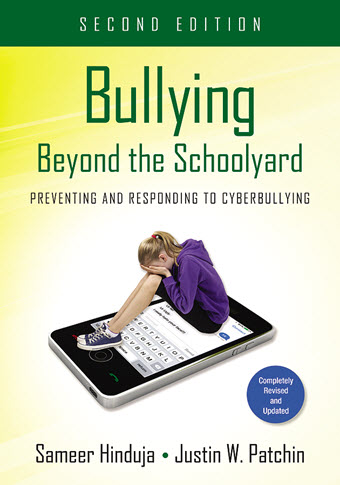 Dr. Steve Taffee, Director of Strategic Projects at Castilleja School in Palo Alto, California, has recently posted a very detailed, honest, and helpful review about our cyberbullying book.  He has given me permission to share it with our blog readers, and so I have included it below:

With Bullying Beyond the Schoolyard: Preventing and Responding to Cyberbullying, Sameer Hinduja and Justin W. Patchin have written a balanced, sensible book about cyberbullying that every concerned educator should read. If your own source of information about cyberbullying has been what you read in the newspaper or see on television, it is doubly important to read something that is based on research, law, and common sense.

The authors define cyberbullying as “willful and repeated harm inflicted through the use of computers, cell phones, and other electronic devices.” We’re not talking about the occasional flame or put-down between adolescents having an online spat, but a repeated behavior that harms another.

The authors begin with an overview of traditional bullying, its relationship to its online counterpart, how they differ, and how changes in technology are providing more and different opportunities for bullying to occur. While there are plenty of horror stories about the extremes of cyberbullying, many of which are recounted in the book, the authors are careful to point out that while such extremes may be deemed newsworthy, they are atypical. They describe the many forms that cyberbullying can take, from email to texting to social networking. Much of their research on social networking appears to have been completed in 2006 and 2007, which accounts for the prominence of MySpace in their reporting. To their credit they had the prescience to acknowledge that new technologies could come along to supplant MySpace, as Facebook has done in terms of total number of users.

For the research-oriented reader, chapter 3 “What do we Know about Cyberbullying,” provides a feast of research – both original and recounted from other studies – about what is known about the extent of the cyberbullying issue, demographics of bullies and victims, and responses of victims to bullying attacks.

Living in the Silicon Valley it is hard for me to imagine that parents are clueless about this issue, but I recognize that this is true here and therefore the lack of awareness may be even more widespread in other parts of the country. Fortunately, in at least one area of technology, adults are flocking online in as great a number as adolescents: social networking. Once the bastion of young people, the fastest growing segment of the Facebook are women, age 55-65. This may be distressing to young people who previously considered social networking as their exclusive province.

The authors seem to be of two minds when it comes to teens and social networking. On the one hand, they point to research that shows that “online interaction provides a venue to learn and refine the ability to exercise self-control, to relate with tolerance and respect others’ viewpoints, to express sentiments in a healthy and appropriate manner, and to engage in critical thinking and decision making… [promoting] self-discovery and identity formation, [and providing] a virtual venue in which to share Web-based cultural artifacts like links, pictures, videos, and stories and remain intimately connected with friends regardless of geographical location.” I heartily support this viewpoint, and their observation that “Some schools are even embracing social networking Web sites as instructional tools.” Yet later in the book they write “we…recommend specifying certain Web sites and software applications that are forbidden at school (e.g. MySpace, AOL Instant Messenger, Google Talk, and Second Life.”

Given their evenhandedness throughout the rest of the text, I find it difficult to reconcile these two viewpoints. They are especially keen on involving teens, educators and parents in a dialogue about appropriate use of the Internet. “Even if we put up a united front, teachers and parents cannot supervise kids 100 percent of the time. They will log on at the library, at a friend’s house, or somewhere else. Why fight it? Why not instead teach teenagers how to use social networking sites (and other online environments) conscientiously?” So which is it? Dialogue or banning? (See my previous post, Is It Safe?)

The chapter on legal issues is intriguing, but ultimately the take-away is that the area of student expression, safety, on- and off-campus behavior, and school liability and responsibility is unsettled case law. Clever attorneys on on different sides of an issue can make compelling arguments that may lead of a conviction in one case, and exoneration in another. (As Shakespeare wrote, “The devil can cite Scripture for his purpose.”) Ultimately, schools are left largely to their own devices. The authors provide several helpful forms in the appendices of the book and other information on the books’ website that schools can use to help develop policies and educational programs for faculty, students, and parents.

(As a side note, one of the interesting cases cited by the authors and many others in the area of student freedom of speech is Tinker v Des Moines. This case was applied in Layschock v. Hermitage School District (2006) to initially uphold a student suspension for creating a MySpace profile that poked fun of the school’s principal, and that the disruption to the school was significant enough to cause computers to be taken offline for five days, some classes (presumably computer classes) to be canceled, and an inordinate amount of attention from teachers. From this brief description, it would appear that the disruption to the school was largely caused by the its overreaction to the the incident. What would the response have been if graffiti had been painted on the school proclaiming “Our principal is a %##!) You remove it in less than an hour. Problem over. I guess some principals are thin skinned.)

If you read only one book about cyberbullying make it this one. It’s an important contribution to the conversation. I hope that the authors will expand their website to make it more interactive and continue to update the book as technology, law, and school practices evolve.