One of the complaints I’ve heard most often from educators, parents, and youth when discussing cyberbullying is that social media companies are slow, inept, or unwilling to respond to the formal “reports” they send in through the site or app. This is not only infuriating, but also depressing because it contributes to a feeling of helplessness that targets feel. In addition, it conveys the notion that the corporate sector in this space simply does not care, and is only interested in making money off of its user base without truly prioritizing safety and security.

Thankfully, I am here to tell you that they are making progress.

Many that we have met in the corporate sector do seem to care, and the major social media companies are devoting an increasing amount of personnel and resources to build healthy, thriving online communities. Of course, a huge part of this has to do with scaling their safety team and safety technology to field, parse, and process all of the reports that come in. ­­­­­This matters so much. It matters because it reflects corporate responsibility, and because individual lives are on the other side of these reports. Their mental health and overall well-being are inextricably tied to the victimization they have experienced, and how they can recover from it.

What we know from the past, and what we are seeing in the present clearly illustrates that the way in which social media companies respond to the cyberbullying reports they receive can either mitigate harm to the target, or can multiply harm.

And we have to avoid the latter at all costs. Here’s why.

In the field of criminal justice, there is a concept called secondary victimization, defined as “negative social or societal reaction in consequence of the primary victimization and is experienced as further violation of legitimate rights or entitlements by the victim” (Montada, 1994). Said another way, “following the loss of control that often accompanies criminal victimization, victims seek recognition and support, and professional but distant reactions from authorities can leave victims feeling rejected and not supported” (Wemmers, 2013).

What the Research Says

Generally speaking, if a victim of a crime has an awful experience with authorities who are supposed to respond to their call for help, they feel doubly victimized. More specifically, research has found that victims often feel re-violated due to the insensitive or inadequate response of those who are supposed to come to their aid (Campbell & Raja, 1999; Patterson, 2011), such as when they fail to recognize the gravity of the offense or display empathy toward the victim’s experience (ToV, 2017). Infrequent contact or incomplete follow-up with the victim also can produce high levels of uncertainty and a deep lack of trust (Wemmers, 2002, 2013), which can result in the victim backing out of the case and choosing not to report any future incidents (Left in the Dark, 2017).

The Importance of Positive Interactions with Those Supposed to Help

However, research is also clear that having positive interactions with authorities in charge of responding is incredibly important for the victim’s recovery process (Wemmers, 2013). Remaining “in the know” and feeling supported by caring, conscientious responders can improve depression and quality of life (Garvin & Beloof, 2015), while also assisting in healing and the rebuilding of their lives (ToV, 2017). Indeed, the manner in which the victim is treated throughout the process, the amount of control the victim is given, and the extent to which they are allowed to participate all greatly influence the victim’s mental and physical well-being (Garvin & Lee, 2013). Communication is the key; it helps victims feel they are involved, know what to expect with the investigation and adjudication of the matter, and take comfort in receiving regular updates – which is tied to their feelings of safety (ToV, 2017; Garvin & Beloof, 2015; Wemmers, 2013).

Let’s bring this back to social media. Recently, I was pleasantly surprised when I reported cyberbullying on both Instagram and Twitter using their standard Report Abuse functionality within their respective apps. Both companies responded immediately to let me know that they had received my report and were looking into the matter, and would get back to me. In both situations, they also thanked me for taking the initiative to report and to help make their online communities safer. Finally, they both got back to me and let me know exactly what they did in response to the violations I reported (they deleted both!), and what I should do to continue to protect myself on their app. 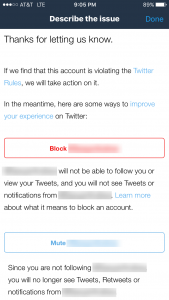 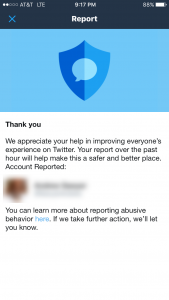 This helped me so much. I felt like I was doing a good thing, and I felt like my voice was being heard. I felt like I was in the loop, and that something would happen, one way or the other. And I felt like I had closure after they dealt with each incident. I could move on, and I could know that they seemed to care about what happened to me and wanted to do all they could to ensure my continued usage and enjoyment of their app and platform. To reiterate, these reports were made through the app – just like any user would – and not through any contacts I have at the social media companies. 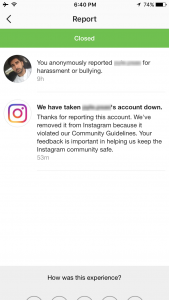 Now, at this point I should state that individuals who have been cyberbullied still regularly contact our Center and ask for help specifically because certain social media companies have not responded in the way I just described.

I honestly don’t know why this is.

Perhaps what was reported did not violate the app’s Terms of Service. To be sure, not all unpleasant or personally offending interactions or posts meet a standard that warrants takedown. Perhaps the social media company needs multiple people to report a specific piece of content before it is escalated and made actionable. Perhaps the target failed to include vital information such as offending usernames, account details, screenshots, or video recordings.

All I can say is that my experiences using the Report functionality within the apps have been positive. I truly hope your experiences are increasingly so.

By increasing capacity on their side to deal with safety issues, coupled with the maturation of algorithms to expediently process reports, social media companies appear to be moving in the right direction. This has to remain a priority, and I expect further improvements as they continue to iterate. Of course, it is in their best interests to create and maintain safe spaces in which we love to interact, because otherwise users will eventually leave, and negative media stories will undermine their valuation and future potential.

Let us know in the Comments if your experiences mirrors or diverges from mine. I’m really curious to hear your feedback.

Please note: Our Contact page explains exactly what type of details you should provide when reporting abuse, and our Report Cyberbullying page provides the contact information for various sites, apps, gaming platforms, and IT companies. If you still struggle and cannot get a response from them, let us know and we will do all we can to help.

Campbell, R. (2005). What really happened? A validation study of rape survivors’ help-seeking experiences with the legal and medical systems. Violence and victims, 20(1), 55-68.