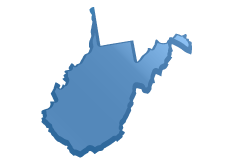 Most of the law concerns itself with the details of an educational diversion program for minor who have engaged in sexting.

(a) Before a juvenile petition is filed for activity proscribed by article eight-a or eight-c, chapter sixty-one of this code, or after probable cause has been found to believe a juvenile has committee a violation thereof, but before an adjudicatory hearing on the petition, the court or a prosecuting attorney may direct or allow a minor who engaged in the activity to participate in an educational diversion program which meets the requirements of subsection (b) of this section. The prosecutor or court may refer the minor to the educational diversion program, as part of a prepetition intervention pursuant to section seven hundred two of this article.

(1) The legal consequences of and penalties for sharing sexually suggestive or explicit materials, including applicable federal and state statutes;

(2) The nonlegal consequences of sharing sexually suggestive or explicit materials including, but not limited to, the effect on relationships, loss of educational and employment opportunities, and being barred or removed from school programs and extracurricular activities;

(3) How the unique characteristics of cyberspace and the Internet, including searchability, replicability and an infinite audience, can produce long-term and unforeseen consequences for sharing sexually suggestive or explicit materials; and

(4) The connection between bullying and cyber-bullying and minors sharing sexually suggestive or explicit materials.

(c) Once a specialized educational diversion program is established by the West Virginia Supreme Court of Appeals consistent with this section, the minor’s successful completion of the educational diversion program shall be duly considered by the prosecutor or the court in their respective decisions to either abstain from filing the juvenile petition or to dismiss the juvenile petition, as follows:

(1) If the minor has not previously been judicially determined to be delinquent, and the minor’s activities represent a first offense for a violation of section three-b, article eight-c, chapter sixty-one of this code, the minor is not subject to the requirements of that section, as long as he or she successfully completes the educational diversion program; and

(2) If the minor commits a second or subsequent violation of article eight-a or eight-c, chapter sixty-one of this code, the minor’s successful completion of the educational diversion program may be considered as a factor to be considered by the prosecutor and court in deciding to not file a petition or to dismiss a petition, upon successful completion of an improvement plan established by the court.

AN ACT to amend the Code of West Virginia, 1931, as amended, by adding thereto a new section, designated §61-8-28a, relating to creating the offense of nonconsensual disclosure of privately taken images of another that show intimate parts of the depicted person or show the depicted person engaged in sexually explicit conduct; defining terms; setting forth elements of the crime; providing for criminal penalties; providing circumstances in which this section does not apply; and excluding providers of interactive computer services, information services, and telecommunications services from liability under this section. (http://www.wvlegislature.gov/Bill_Text_HTML/2017_SESSIONS/RS/Bills/SB240%20SUB1%20enr.htm)

Be it enacted by the Legislature of West Virginia:

That the Code of West Virginia, 1931, as amended, be amended by adding thereto a new section, designated §61-8-28a, to read as follows:

§61-8-28a. Nonconsensual disclosure of private intimate images; definitions; and penalties.

(a) As used in this section:

(1) “Disclose” means to publish, publicly display, distribute, deliver, circulate or disseminate by any means, including, but not limited to, electronic transmission.

(2) “Image” means a photograph, videotape, motion picture film, digital recording or any product of any mechanical or electronic recording process or device that can preserve, for later viewing, a visual image.

(4) To “publicly disclose” means to disclose an image to one or more persons other than those persons whom the person depicted understood would view the image at the time it was captured.

(b) No person may knowingly and intentionally disclose, cause to be disclosed or threaten to disclose, with the intent to harass, intimidate, threaten, humiliate, embarrass, or coerce, an image of another which shows the intimate parts of the depicted person or shows the depicted person engaged in sexually explicit conduct which was captured under circumstances where the person depicted had a reasonable expectation that the image would not be publicly disclosed.

(c) (1) A person convicted of a violation of subsection (b) of this section is guilty of a misdemeanor and, upon conviction thereof, shall be confined in jail for not more than one year, fined not less than $1,000 nor more than $5,000, or both confined and fined.

(2) Notwithstanding the provisions of subdivision (1) of this subsection, a person convicted of a second or subsequent violation of subsection (b) of this section is guilty of a felony and, upon conviction thereof, shall be imprisoned in a state correctional facility for not more than three years, fined not less than $2,500 nor more than $10,000, or both imprisoned and fined.

(d) The provisions of this section do not apply to:

(1) Images disclosed with the prior written consent of the person depicted;

(2) Images depicting the person voluntarily exposing himself or herself in a public or commercial setting; or

(3) Disclosures made through the reporting of illegal conduct or the lawful and common practices of law enforcement, criminal reporting, legal proceeding or medical treatment.