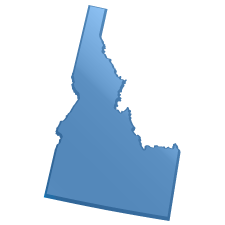 HOUSE BILL NO. 625
BY JUDICIARY, RULES AND ADMINISTRATION COMMITTEE AN ACT1 RELATING TO DISTRIBUTION OF UNSOLICITED SEXUAL MATERIAL; AMENDING CHAPTER
41, TITLE 18, IDAHO CODE, BY THE ADDITION OF A NEW SECTION 18-4117, IDAHO CODE, TO PROVIDE FOR THE CRIME OF DISTRIBUTION OF UNSOLICITED SEXUAL
MATERIAL, TO PROVIDE A PENALTY, AND TO DEFINE A TERM; AND DECLARING AN EMERGENCY AND PROVIDING AN EFFECTIVE DATE.
Be It Enacted by the Legislature of the State of Idaho:
SECTION 1. That Chapter 41, Title 18, Idaho Code, be, and the same is hereby amended by the addition thereto of a NEW SECTION, to be known and designated as Section 18-4117, Idaho Code, and to read as follows: 18-4117. DISTRIBUTION OF UNSOLICITED SEXUAL MATERIAL — PENALTY (1) Every person over eighteen (18) years of age who, without the consent of the recipient who is also over eighteen (18) years of age, distributes to the recipient any unsolicited sexual material with the intent to annoy, terrify, threaten, intimidate, harass, or offend or to arouse, appeal to, or gratify the lust, passions, or sexual desires of the sender, recipient, or third party is guilty of a misdemeanor punishable by a fine of not more than one thousand dollars ($1,000) or by imprisonment in the county jail for not more than one (1) year, or by both such fine and imprisonment.

(2) For the purposes of this section, “unsolicited sexual material” means any picture, photograph, drawing, sculpture, motion picture film, or similar visual representation or image of a person or portion of the human body that depicts nudity, sexual conduct, or sadomasochistic abuse.

SECTION 2. An emergency existing therefor, which emergency is hereby declared to exist, this act shall be in full force and effect on and after
July 1, 2022.

HB 555 (proposed in 2016) would make it a misdemeanor to send/receive explicit imagery while a minor, or a felony in some cases.

https://codes.findlaw.com/id/title-18-crimes-and-punishments/id-st-sect-18-6609.html
18-6609. Crime of video voyeurism. (1) As used in this section:
(a) “Broadcast” means the electronic transmittal of a visual image with the intent that it be viewed by a person or persons.
(b) “Disseminate” means to make available by any means to any person.
(c) “Imaging device” means any instrument capable of recording, storing, viewing or transmitting visual images.
(d) “Intimate areas” means the nude genitals, nude pubic area, nude buttocks or nude female nipple.
(e) “Person” means any natural person, corporation, partnership, firm, association, joint venture or any other recognized legal entity or any agent or servant thereof.
(f) “Place where a person has a reasonable expectation of privacy” means:
(i) A place where a reasonable person would believe that he could undress, be undressed or engage in sexual activity in privacy, without concern that he is being viewed, photographed, filmed or otherwise recorded by an imaging device; or
(ii) A place where a person might reasonably expect to be safe from casual or hostile surveillance by an imaging device; or
(iii) Any public place where a person, by taking reasonable steps to conceal intimate areas, should be free from the viewing, recording, storing or transmitting of images obtained by imaging devices designed to overcome the barriers created by a person’s covering of intimate areas.
(g) “Publish” means to:
(i) Disseminate with the intent that such image or images be made available by any means to any person; or
(ii) Disseminate with the intent that such images be sold by another person; or
(iii) Post, present, display, exhibit, circulate, advertise or allow access by any means so as to make an image or images available to the public; or
(iv) Disseminate with the intent that an image or images be posted, presented, displayed, exhibited, circulated, advertised or made accessible by any means and to make such image or images available to the public.
(h) “Sell” means to disseminate to another person, or to publish, in exchange for something of value.
(i) “Sexual act” includes, but is not limited to, masturbation; genital, anal or oral sex; sexual penetration with an object; or the transfer or transmission of semen upon any part of the depicted person’s body.
(2) A person is guilty of video voyeurism when, with the intent of arousing, appealing to or gratifying the lust or passions or sexual desires of such person or another person, or for his own or another person’s lascivious entertainment or satisfaction of prurient interest, or for the purpose of sexually degrading or abusing any other person, he uses, installs or permits the use or installation of an imaging device at a place where a person would have a reasonable expectation of privacy, without the knowledge or consent of the person using such place.
(3) A person is guilty of video voyeurism when:
(a) With the intent to annoy, terrify, threaten, intimidate, harass, offend, humiliate or degrade, he intentionally disseminates, publishes or sells or conspires to disseminate, publish or sell any image of another person who is identifiable from the image itself or information displayed in connection with the image and whose intimate areas are exposed, in whole or in part, or who is engaged in a sexual act;
(b) He knew or reasonably should have known that the person depicted in the image understood that the image should remain private; and
(c) He knew or reasonably should have known that the person depicted in the image did not consent to the dissemination, publication or sale of the image.
(4) A violation of this section is a felony.
(5) This section does not apply to:
(a) An interactive computer service, as defined in 47 U.S.C. 230(f)(2), an information service, as defined in 47 U.S.C. 153 or a telecommunication service, as defined in section 61-121(2) or 62-603(13), Idaho Code, for content provided by another person, unless the provider intentionally aids or abets video voyeurism;
(b) Images involving voluntary exposure in public or commercial settings; or
(c) Disclosures made in the public interest including, but not limited to, the reporting of unlawful conduct or the lawful and common practices of law enforcement, criminal reporting, legal proceedings or medical treatment.

(2) Every person who knowingly and willfully has in his possession any sexually exploitative material as defined in section 18-1507, Idaho Code, for other than a commercial purpose, is guilty of a felony, and shall be punished by imprisonment in the state prison for a period not to exceed ten (10) years and by a fine not to exceed ten thousand dollars ($10,000)