Since 2002, we have surveyed over 20,000 middle and high school students in twelve different studies from over 98 different schools throughout the United States. The first two studies were online exploratory samples used to obtain a general understanding of the problem. As such, the numbers obtained are higher than average and not representative because they only include online teens who volunteered to participate. Our ten most recent studies, however, have all been random samples of known populations, so we can be fairly confident in the reliability and validity of the data obtained (click here for more information about the methodology). Overall, about 27% of the students we have surveyed over the last ten studies have told us that they have been cyberbullied at some point in their lifetimes. About 10% said they were cyberbullied in the 30 days preceding the survey. Similarly, about 16% of those who we surveyed admitted that they had cyberbullied others at some point in their lifetimes (about 6% in the most recent 30 days). More detailed information about our various studies can be found here.

In 2015 we reviewed all of the published research we could find that included prevalence rates for cyberbullying. This work built on our earlier effort to quantitatively summarize published cyberbullying articles which we wrote about in our book Cyberbullying Prevention and Response: Expert Perspectives (see especially chapter 2). In total, we have now reviewed 234 articles published in peer-reviewed academic journals. One hundred and twenty-two of those included cyberbullying victimization rates and 88 included cyberbullying offending rates. As you can see from the charts below (click to enlarge), rates across all of the studies ranged widely, from 0.4% to 92% for victimization and from 1.0% to 60.4% for offending. The average across all of these studies was remarkably similar to the rates that we found in our work (about 21% of teens have been cyberbullied and about 13% admitted to cyberbullying others at some point in their lifetimes). Taken as a whole, it seems safe to conclude that about one out of every four teens has experienced cyberbullying, and about one out of every six teens has done it to others. 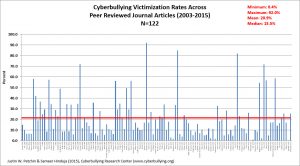 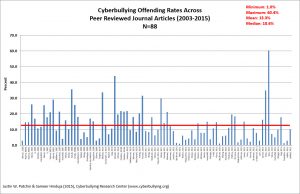 A couple of other broad generalizations can be made about cyberbullying, based on recent research:

There are only three studies that we are aware of that have explored cyberbullying experiences of students across the United States over time. The first analysis have been conducted by our friends at the Crimes Against Children Research Center at the University of New Hampshire. Examining the three waves of the Youth Internet Safety Survey (2000, 2005, 2010), they find a slight increase in cyberbullying behaviors over that time period (from 6% to 9% to 11%).

More recently, the Centers for Disease Control and Prevention conduct their biennial survey of students across the U.S. in their Youth Risk Behavior Surveillance System (YRBSS). This survey has long asked about bullying at school but in 2011 they added a question about “electronic” bullying. In 2017 (the most recent year available), 14.5% of students reported that they were bullied electronically, compared to 15.5% in 2015, 14.8% in 2013, and 16.2% in 2011.

Finally, the School Crime Supplement (SCS) of the National Crime Victimization Survey (NCVS) also surveys students every other year about victimization at school (and online bullying). This source observed a slight increase from 2009 to 2011 (from 6.2% to 9%), but the rate also decreased to 6.7% in 2013. In the most recent iteration of this survey (conducted in 2015), 11.5% of students reported that they had been “bullied online or by text” though the way cyberbullying was measured in this year changed and therefore it cannot easily be compared to the other three years. So it is difficult from just looking at these few studies to determine if rates of cyberbullying is increasing or decreasing. We need to collect additional data points over time using consistent measures.