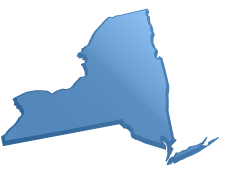 Senate Bill S4901 – AN ACT to amend the executive law, in relation to expanding the scope of
unlawful discriminatory practices to include public educational institutions. (https://legislation.nysenate.gov/pdf/bills/2019/S4901) (2019)

SENATE BILL – S 1987-B (A 3661-C): “Dignity for All Students Act” to afford all students in public schools an environ­ment free of harassment and discrimination based on actual or perceived race, national origin, ethnic group, religion, disability, sexual orientation, gender or sex; passed by the NY State Senate on June 22, 2010, signed by the governor on September 8, 2010. “‘Harassment’ shall  mean the creation of a hostile environment by conduct or by verbal threats, in­timidation or abuse that  has  or  would have  the  effect  of  unreasonably and substantially interfering with a student’s educational performance, opportunities or benefits, or mental, emotional or physical well-being; or  conduct,  verbal  threats,  intimidation  or abuse that reasonably causes or would reasonably be expected to cause a student to fear for his or her physical safety; such conduct, verbal threats, intimidation or abuse includes but  is  not  limited  to conduct, verbal threats, intimidation or abuse based on a person’s actual  or  perceived  race,  color,  weight, national origin, ethnic group, religion, religious practice, disability, sexual orientation, gender  or sex.” Requires “instruction in civility, citizen­ship and character education.” Scheduled to take effect July 1, 2012.

Takes effect July 1, 2013: “The legislature also recognizes that most cyberbullying originates off-campus, but nonetheless affects the school environment and disrupts the educational process, impeding the ability of students to learn and too often causing devastating effects on students’ health and well-being.”  Includes behavior that “occurs off school property and creates or would foreseeably create a risk of substantial disruption within the school environment…” http://open.nysenate.gov/legislation/bill/S7740-2011

“Law to Encourage the Acceptance of All Differences (LEAD)” – (Proposed April 29, 2011—still active as of June 21, 2012). http://open.nysenate.gov/legislation/bill/S4921-2011; argues: “it is imperative that any legislation aimed at protecting students from bullying includes a prohibition of acts of cyberbullying when such acts create a hostile environment for the student at school or materially and substantially disrupt the educational process or the orderly operation of a school.” That said, the proposed law does not appear to include any specific language that would explicitly allow school intervention in behaviors that occur away from school.

Commissioner’s Regulation 100.2 (l) and Education Law 2801 and Education Law 2801-a: Requires each board of educa­tion to adopt and enforce a code of conduct, which includes disciplinary measures to be taken in incidents involving the use of physical force or harassment. Requires school safety plans to contain strategies for improving communication among students and between students and staff and reporting of potentially violent incidents, such as creating a forum or designating a mentor for students concerned with bullying or violence and establishing anonymous reporting mecha­nisms for school violence.

H.B. A04028 (S 7158) – (Proposed in 2009 but never enacted): Increases penalty for some forms of hazing from a misdemeanor to a felony. Adds provisions to education law which would prohibit “bullying and cyber-bullying on school property, including a school function.” Establishes a class B misdemeanor of failure to report hazing and requires instruction to discourage bullying and cyber-bullying in schools and polices for schools to be enacted. “‘Cyber-bullying’ means a course of con­duct or repeated acts of abusive behavior by communicating through electronic means, with a person anonymously or otherwise over a period of time committing such acts as, but not limited to, taunting, insulting, humiliating, harass­ing, menacing, sending hate mail or embarrassing photographs.”

Criminal electronic harassment (does not expressly include electronic forms): Harassment in the second degree.